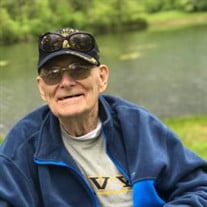 Albert Vaughn Miller passed away on June 5, 2020, he was 89. Al was born to Vaughn and Mary Miller in Melvindale, Michigan on April 26, 1931. The family moved to Jonesboro, Indiana in 1940. Al graduated from Mississinewa High School in 1949 and excelled in various sports. He was also valedictorian of his senior class. He joined the U.S. Navy in 1949 and was stationed in San Diego, California. Al served on the Attack Transport Ship USS Union and was honorably discharged in 1951. He lived and worked in Grant County, Indiana for over 80 years. Al was a barber and owned his own barbershop in Marion, Indiana for several years before accepting a position with South Marion Lumber. Al was a resident of CrownPointe Communities in Lebanon, Indiana until his death. Al was preceded in death by his beloved wife, Barbara Joan Miller, who passed away in December 2017, his parents, Vaughn and Mary Miller, brothers, David Miller, Merrill Miller, Harold Miller and James Miller; sisters Patricia Coak, Jacqueline Jones and Jean Ann Brookshire. Al is survived by his children: Greg Miller (Jinny) of Marion, IN, Joe Miller (Victoria) of Gas City, IN, Linda Braithwaite (Bruce) of Bradenton, FL, Dennise Nordholt (Dale) of Indianapolis, IN, Lee Anne Maxwell (Jeff) of Bradenton, FL, and Amy Bigler (Michael) of Lebanon, IN, 9 grandchildren: Brett, Ryan, Rachel, Christy, Alisa, Andrea, Alan, Conner and Owen, and 17 great-grandchildren. Al is also survived by his sister-in-law Betty Miller, sister-in-law Jean Chambers, brother and sister-in-law Bud and Rita Miller and brother-in-law Butch Brookshire. Al enjoyed fishing, watching baseball and basketball, and spending time with his family. He was a life-long Chicago Cubs fan. Al was a devout Christian and was active in the Central Christian Church in Marion, IN where he served as a deacon, Sunday school teacher and member of the choir for many years. The family would like to thank the staff of CrownPointe Communities of Lebanon, Dr. Michael Hornbecker & staff and Dr. Travis Montgomery & staff and Best Choice Healthcare for their excellent care of Dad. We are so grateful for your compassion, support and friendship. Donations can be made in Al's memory to CrownPointe Life Enrichment, C/O CrownPointe Communities of Lebanon - Attention: Amy Bigler, 610 CrownPointe Drive, Lebanon, IN 46052. Services will be held at a later date.

Albert Vaughn Miller passed away on June 5, 2020, he was 89. Al was born to Vaughn and Mary Miller in Melvindale, Michigan on April 26, 1931. The family moved to Jonesboro, Indiana in 1940. Al graduated from Mississinewa High School in 1949... View Obituary & Service Information

The family of Albert Vaughn Miller created this Life Tributes page to make it easy to share your memories.