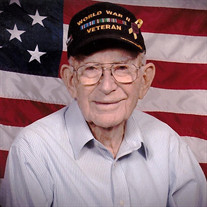 Alvin Ping passed away peacefully at his home surrounded by his loving family on February 9, 2020 at the age of 100. He was born July 13, 1919 in Miller, South Dakota and was the 10th and final remaining member of the twelve children born to Charles and Mary Alice (Barkes) Ping. In his youth, his family moved to the Brown County area of Indiana. He graduated from Columbus High School. Much of his adult life was lived in Lowell, Indiana. Alvin married Ruth Marie (Kimberlin-Wright) Ping on April 27, 1943 in New London, Connecticut. She preceded him in death on April 22, 2012. They had four children: David (Mary) Ping of Lebanon; Daniel (Patricia) Ping of Gainesville, Florida; Sue Ann (Howard Matheson) Dayton of Lebanon; William (Barbara) Ping of Lowell, Indiana. Together they had numerous grandchildren, great grandchildren, nieces and nephews of whom he was deeply proud. His grandchildren include: Mark Ping, Cathy Massey, Amy Shue, Kevin Ping Adam Ping, Eric Ping Lisa Ping, Amber Dayton, Matthew Ping, and Keith Ping. In addition to his parents and his beloved wife, Al was preceded in death by his son, Dan, and an infant great-grandchild. Following the onset of WWII, Alvin enlisted and proudly served his country in the United States Navy aboard a submarine, USS Kingfish. He enjoyed sharing stories and was recently honored at the WWII museum on Veteran’s Day in New Orleans. Alvin worked as a printer in Indianapolis and Hammond, Indiana and later worked at LaSalle Steel in Hammond before retirement. He was active in his church communities throughout his life including Centenary United Methodist Church in Lebanon. Alvin had a passion for fishing, farming and gardening. In addition, he volunteered time to Boone County Senior Services and to the Caring Center in Lebanon and was always willing to give of his time and talents to anyone in need. Memorial Services will be held at 11:00 a.m. on Saturday, March 7, 2020 at Centenary United Methodist Church, 910 Fordice Road, in Lebanon with Rev. Peter Curts, officiating. Visitation will begin at 9:30 a.m. until the time of the service. Interment of Ashes with military rites will follow at Oak Hill Cemetery in Lebanon. Myers Mortuary and Boone County Crematory have been entrusted with his care. Memorial contributions may be made in his memory to Boone County Senior Services, The Caring Center of Lebanon, Centenary United Methodist Church, or to the charity of the donor’s choice.

Alvin Ping passed away peacefully at his home surrounded by his loving family on February 9, 2020 at the age of 100. He was born July 13, 1919 in Miller, South Dakota and was the 10th and final remaining member of the twelve children born to... View Obituary & Service Information

The family of Alvin L Ping created this Life Tributes page to make it easy to share your memories.

Alvin Ping passed away peacefully at his home surrounded by his...

Send flowers to the Ping family.