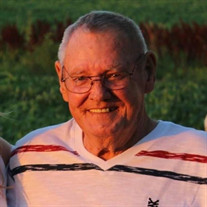 Ammon Jearl “Sonny” Davis, 79, passed away on August 2, 2020 at the Heart Hospital in Indianapolis. He was born on March 29, 1941 in Boone County, Indiana, to the late Ammon Lyle and Ruby Marie (Reagan) Davis. Sonny was a 1959 graduate of Thorntown High School and attended Purdue University. Following high school, he served his country honorably in the U.S. Navy. On June 29, 1963, he was married to Judy (Hinton) Davis in Thorntown, Indiana; she passed away in May, 2020. He worked in construction as a union member and was a member of the Eagles and the Moose Lodge, both in Lebanon. Sonny loved his dogs, Mac & Ike, camping, driving his golf cart around town and was very involved with CB’s. In addition to his hobbies, he loved attending family gatherings. Survivors include: Children: Ammon Jearl Davis, Jr. and wife, Kayla of Warsaw Judy Thorn and husband, Michael of Lebanon Five Grandchildren: Ammon Jearl Davis, III Brittany Miller Breanna Burcham Jared Fawley Jonathan Fawley Eleven Great Grandchildren Sister: Tiny Pratt of Lebanon Several Nieces and Nephews In addition to his parents, Sonny was preceded in death by brothers, Russell Eugene Davis, Alfred L. “Bud” Davis, and sisters, Jeanette M. Sharp and Ruth Linton. Funeral Services with military rites are to be held at 11:00 a.m. Friday, August 7, 2020 at Myers Mortuary, 1502 North Lebanon Street, in Lebanon, Indiana. Visitation will be held on Friday, from 9:00 a.m. until the time of service at the funeral home in Lebanon. Boone County Crematory has been entrusted with his cremation following services. Graveside Services will take place at Lincoln Memory Gardens at a later date. Memorials may be directed to the American Heart Association, Central Indiana-Regional Office, 6500 Technology Center Drive, Suite #100, Indianapolis, Indiana 46077

The family of Ammon "Sonny" Davis created this Life Tributes page to make it easy to share your memories.

Send flowers to the Davis family.