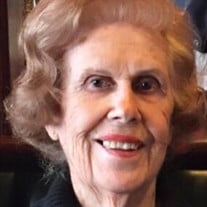 Mrs. Barbara Jane Broshar, 95, passed away on Wednesday, April 20, 2022 at Wellbrooke of Avon in Indianapolis, Indiana. She was born in Lebanon, Indiana on April 6, 1927, a daughter of the late William Luther and Frances (McCormack) Harlos. She was a 1945 graduate of Lebanon High School and attended one year at Indiana University. After college she volunteered with the American Red Cross in the department of home services. On December 27, 1950; she was married to Donald B. Broshar; they shared 41 loving years together before he passed away on October 31, 1992. Barbara was a secretary at Central Elementary School for 17 years, retiring in 1978. She was a longtime member of Centenary United Methodist Church and also attended Speedway Christian Church. She and her late husband enjoyed wintering in Fort Myers, Florida. She was a good friend to many, loved her family immensely and cherished her grandchildren. Survivors include her daughter, Debbie and husband, Scott Forbes of Indianapolis; two grandchildren, Jared and wife, Stacey Forbes of McCordsville, Lauren Forbes and fiancé, Christopher Johnson of Speedway. In addition to her parents and husband, Barbara was preceded in death by siblings, Charles Harlos, Eugene Harlos, Jenny Owen, Betty Clark, and Martha McKeen. Funeral Services will be held at 2:00 p.m. on Tuesday, April 26, 2022 at Myers Mortuary, 1502 North Lebanon Street, Lebanon, Indiana 46052. Visitation will be held from 12:00 p.m. until the time of service on Tuesday, at the funeral home in Lebanon. Interment will follow services at Oak Hill Cemetery in Lebanon. Memorials: May be made in her honor to Speedway Christian Church, 5110 West 14th Street, Indianapolis, Indiana 46224 or Speedway Animal Rescue: 6530 West 11th Street, Indianapolis, Indiana 46214.

Mrs. Barbara Jane Broshar, 95, passed away on Wednesday, April 20, 2022 at Wellbrooke of Avon in Indianapolis, Indiana. She was born in Lebanon, Indiana on April 6, 1927, a daughter of the late William Luther and Frances (McCormack) Harlos.... View Obituary & Service Information

The family of Barbara J. Broshar created this Life Tributes page to make it easy to share your memories.

Send flowers to the Broshar family.