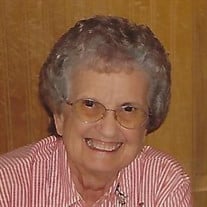 Barbara Jean (Keeney) Canine, age 90, of Sugar Land, TX and formerly of Crawfordsville, Anderson and Frankfort, IN passed away peacefully on January 19, 2019 at Landon Ridge of Sugar Land. She was born March 8, 1928 to William A. Keeney and Mable L. Keeney. She graduated from Frankfort High School in 1946. On September 3, 1950, she married the love of her life, Byron D. Canine of Lebanon, IN. They moved to Anderson shortly thereafter living there until 2012. Barbara became a successful Tupperware saleswoman and spent her later professional career assisting in the management of the local Tupperware franchise under the ownership of Don and Shirley Fleischhauer. In retirement, she and Byron managed an antique Depression Glass business which allowed them to travel throughout the country gaining many friends along the way. Barbara was a devoted wife, mother, grandmother, great-grandmother and great-great-grandmother. Above all else, she loved her family and especially enjoyed being with the grandchildren. Barbara and Byron enjoyed traveling and especially loved the 17 years of annual family vacations at Gulf Shores, AL where many wonderful memories were made. She was an active member of the Anderson Phi Chi Epsilon sorority, serving in several leadership roles and loved playing bridge and euchre. Barbara was preceded in death by Byron on October 7, 2014, her parents, her two brothers, William and Robert Keeney and one sister-in-law, Ilo Keeney. Survivors include children: Landa J. McGinnis (Noel), Rod A. Canine (Terri Brown) and Jay D. Canine (Teena Manship); 8 grandchildren, 12 great-grandchildren and one great-great grandchild in addition to several nieces and nephews. Funeral service will be held Saturday January 26, 2019 at 12:00 noon at Myers Mortuary in Lebanon, IN with 2 hours of visitation prior. Interment will follow services at Hopewell Cemetery in Boone County. Memorial contributions may be made to the Salvation Army.

Barbara Jean (Keeney) Canine, age 90, of Sugar Land, TX and formerly of Crawfordsville, Anderson and Frankfort, IN passed away peacefully on January 19, 2019 at Landon Ridge of Sugar Land. She was born March 8, 1928 to William A. Keeney and... View Obituary & Service Information

The family of Barbara Jean Canine created this Life Tributes page to make it easy to share your memories.

Send flowers to the Canine family.