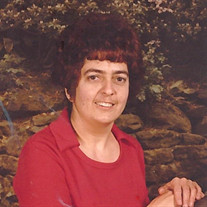 Beverly Jean Fairfield, 77, of Thorntown, Indiana, passed away Sunday, October 20, at Eagle Creek Health Care Center in Indianapolis. She was born in Toms River, New Jersey on April 15, 1942; a daughter of the late Ralph and Mabel Michelle Smith (Gibbs) Marks. Beverly was a 1961 graduate of Freehold High School in New Jersey. She was married to Jerry Fairfield in 1964 and they later divorced. She moved to Thorntown, Indiana in 1971 and worked many years as waitress at the former Farm House restaurant in Lebanon, The Chief Inn and The Lost Frontier in Thorntown. Beverly was a faithful member of Thorntown Baptist Church. She enjoyed bowling with friends, fishing and singing in the church choir. Survivors: One Brother: Eddie Marks of Santa Barbara, California Two Sisters: Joyce Crider of Altona, Pennsylvania Shirley Longnecker of Cambridge City, Indiana Sister-In-Law: Mary Marks of St. Lucia, Florida Special Niece: Lillian O’Toole along with several other wonderful nieces and nephews In addition to her parents, Beverly was preceded in death by two brothers; Frank Marks, and Ralph Marks; two sisters, Grace Rago and Dorothy Oburgo; brothers-in-law, Robert Crider and Leonard Rago. Funeral services will be held at Thorntown Baptist Church, 120 South Powell Street, Thorntown, Indiana at 12:00 p.m. noon on Friday, October 25, 2019. Visitation will be at the church in Thorntown from 10:00 a.m. to 12:00 p.m. on Friday, October 25. Interment will follow services at Maple Lawn Cemetery in Thorntown. In lieu of flowers, memorials may be made to the charity of the donor’s choice. Myers & Hunt Mortuary, 116 West Plum Street, Thorntown, IN 46071 are handling her arrangements.

The family of Beverly Jean Fairfield created this Life Tributes page to make it easy to share your memories.

Send flowers to the Fairfield family.