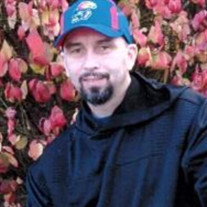 Richard Brian Corley, 49, passed away Tuesday, February 8, 2022, at Landmark Recovery Center in Carmel, Indiana. He was born in Cedartown, Georgia on October 20, 1972, a son of Edwina “Nina” (Tillery) Schaffer and the late Richard Cain Corley. Raised in Georgia, Brian was a 1992 graduate of Cedartown High School and had attended college in Topeka, Kansas. He had worked at T.A. Truckstop in Whitestown and also worked in flooring construction. Brian had many interests, he enjoyed photography, and wood and leather crafting. Survivors include his mother, Nina Schaffer of Lebanon; five children all of Kansas, Apryl Corley, Kira Corley, Darren Corley, Richard Brian Corley, Jr., and Emilee Corley; one grandchild of Kansas, Luca Corley; and several siblings. In addition to his father, Brian was preceded in death by a sister, Monica Altic. Funeral Services are planned for 3:00 p.m. on Tuesday, February 15, 2022, at Myers Mortuary, 1502 North Lebanon Street, in Lebanon, Indiana. Visitation will be held from 1:00 p.m. until the time of services. Boone County Crematory has been entrusted with his cremation arrangements following services. In lieu of flowers, memorials may be made to Myers Mortuary to assist the family.

The family of Brian Corley created this Life Tributes page to make it easy to share your memories.

Send flowers to the Corley family.