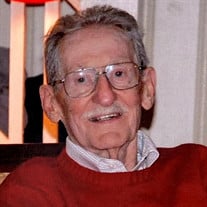 Thomas Bruce Torrance was born July 1, 1930 in Detroit Michigan; the son of Marie Helsden and Henry Torrance. He passed away Friday, May 22nd at the age of 89 at Witham Memorial Hospital where he was an extended care patient. Bruce attended Hillsdale College until enlisting in the military in 1950. He served in the U.S. Air Force during the Korean war as a photographer until 1954. During his service he received an award for being airman of the month. After his service he married Jean Howe Gale. Together they had two sons, (Bruce H. Torrance and Brian A. Torrance). They lived in Cleveland, Ohio until moving to Indianapolis in 1967. He later married Sue Chapman in 1971. They moved to Lebanon with Sue's two sons, (Ron W. Chapman and Andy C. Chapman). Bruce worked as an insurance adjuster at American States Insurance Company and was promoted to vice president of claims during his tenure. Bruce was active in the Lebanon Elks Club and the Elks National Hoop Shoot. He was a deacon for many years at the Lebanon Presbyterian Church and served as a volunteer at Witham Memorial Hospital in Lebanon for many years. In 2012, he received an award for "volunteer of the year" from Witham. Bruce will always be remembered for his funny sense of humor and his love for antiques and animals. He loved to travel and work in his garden planting flowers. He also loved spending time with all of his grandchildren. He is survived by his wife, Sue; four sons, Bruce, Brian, Ron, and Andy; sister, Mary Margaret Abbott; 13 grandchildren, Katie, Emily, Molly, Alli, Zach, and Owen Torrance and Jake, Ethan, Clay, Ben, Lauren, Emma, Lilly Chapman; and good friend, Gary French. Family and Friends are invited to attend the Celebration of Life at Myers Mortuary in Lebanon Indiana on Friday, May 29, 2020 at 3 p.m., with calling from 1-3 p.m. John 16:22 “Therefore you now have sorrow; but I will see you again and your heart will rejoice, and your joy no one will take from you.”

Thomas Bruce Torrance was born July 1, 1930 in Detroit Michigan; the son of Marie Helsden and Henry Torrance. He passed away Friday, May 22nd at the age of 89 at Witham Memorial Hospital where he was an extended care patient. Bruce attended... View Obituary & Service Information

The family of Bruce Torrance created this Life Tributes page to make it easy to share your memories.

Send flowers to the Torrance family.