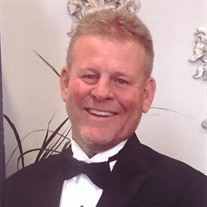 Chad Bradey Miller of Lebanon passed away on December 18, 2020 at the age of 51. He was born March 23, 1969 in Lebanon, Indiana, the son of Sharon Kay (Fuller) Stradling and the late, James Harold Miller. He was a 1988 graduate of Lebanon High School, where he played football and wrestled. Chad spent several years during high school and for a short while afterwards as a carpenter, a trade at which he was very talented. After receiving several certifications, he began employment at Westfield Utilities for three years before transferring to Zionsville Wastewater treatment facility where he spent 16 years. His carpentry skills were of notable contribution during facility upgrades for Lebanon First Church of the Nazarene ensuring preventative structural maintenance was conducted in a timely manner. His favorite community event was spent after work in the humid summer heat and the frigid drizzle of an Indiana autumn and spanned 10 years while coaching and mentoring young athletes for Boone County Youth Football League. Chad was best known for his passionate drive, giving spirit and attention to detail. He was always very particular with his belongings and shoes were always to be left at the door. He was firm but fair with his children, always driving home the lesson of great moral character. Doing what you say and saying what you mean was especially important to Chad and he wanted his children to exemplify that trait. Chad enjoyed spending time outside with his children fishing, hunting, camping or fixing up the house or cabin. He is survived by his wife of 16 years Michelle; children Nick Weaver, Christian Knight, Gage and Raquelle Miller; his mother Sharon Stradling; sisters, Ali (Dr. Jon) Robinson, Delaina Clark, and little brother Richard Stradling. In addition to his father, Chad was preceded in death by a half-sister, Tracey Jo Jones. A celebration of life will be held at 4:00 p.m. on Wednesday, December 23, 2020 at Myers Mortuary, 1502 North Lebanon Street, in Lebanon. Visitation will be on Wednesday, December 23 from 1:00 p.m. until 4:00 p.m. at the funeral home in Lebanon. Streaming of the service can be viewed on the Myers Mortuary Facebook page at the time of service. Myers Mortuary and Boone County Crematory have been entrusted with his cremation arrangements. Memorials may be made in his memory to the charity of the donor’s choice.

Chad Bradey Miller of Lebanon passed away on December 18, 2020 at the age of 51. He was born March 23, 1969 in Lebanon, Indiana, the son of Sharon Kay (Fuller) Stradling and the late, James Harold Miller. He was a 1988 graduate of Lebanon... View Obituary & Service Information

The family of Chad Miller created this Life Tributes page to make it easy to share your memories.