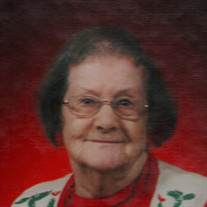 Charlene Vernon, 101, of Thorntown, Indiana, passed away on Saturday, August 28, 2021, at Bickford of Crawfordsville. She was born on December 22, 1919, in Montgomery County, a daughter of the late Orville Earl and Alta (Flaningam) Deck. She attended school at Shannondale and graduated from Darlington High School in 1938. Following high school, she worked at the Thorntown Telephone Company and a few years later at Woolworths in Crawfordsville. On October 10, 1943, she was united in marriage to David M. Vernon in Logansport, Indiana. He preceded her in death on December 16, 1989. Early in their marriage, they lived in Pennsylvania and Fort Wayne, Indiana. In 1948 they moved back on the family farm in Darlington. Charlene was a devoted farm wife, who took pride in taking care of her family. She was dedicated member of the Shannondale Presbyterian Church, where she was the pianist and organist for over 60 years. Her other memberships included the Darlington Eastern Star over 75 years, Thorntown Home Economics Club, Shannondale Ladies Aide, and card clubs. She also volunteered a few years at Witham Memorial Hospital. Survivors include her daughter: Linda Vernon-Goldman of Darlington and granddaughter: Lisa M. Goldman of Thorntown In addition to her parents and her husband, Charlene was preceded in death by sisters, Edith, and her twin sister, Charlotte. Visitation will be held from 1:00 to 2:30 p.m. on Friday, September 3, 2021, at Myers & Hunt Mortuary, 116 West Plum Street in Thorntown, Indiana. Funeral Services will be on Friday at 2:30 p.m. at the funeral home in Thorntown. Interment will follow services at Lutheran Cemetery in Darlington, Indiana. The family would prefer those in attendance to wear a mask. Memorials may be given in her memory to Alzheimer's and Dementia Research. Online condolences: MyersMortuary.com

Charlene Vernon, 101, of Thorntown, Indiana, passed away on Saturday, August 28, 2021, at Bickford of Crawfordsville. She was born on December 22, 1919, in Montgomery County, a daughter of the late Orville Earl and Alta (Flaningam) Deck.... View Obituary & Service Information

The family of Charlene Vernon created this Life Tributes page to make it easy to share your memories.

Charlene Vernon, 101, of Thorntown, Indiana, passed away on Saturday,...

Send flowers to the Vernon family.