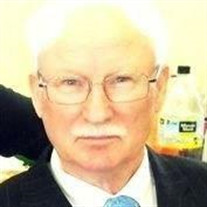 Rev. Charles Leland Brinson, 82, passed away on September 2, 2019 at Homewood Health Campus in Lebanon. He was born on September 27, 1936 in Avoca, Indiana, the son of the late Herbert and Vivian (Hall) Brinson. He graduated from Williams High School in 1954. His father wanted him to become a veterinary, but God had other plans. Charles married Ruth (Sheetz) Brinson on September 1, 1956 in Avoca, Indiana. Ruth survives and they recently shared 63 loving years together. He began ministry in 1952, and ordained in 1961 in Lafayette, Indiana. He served for 50 years for a number of churches ranging from New Maysville to Thorntown. He retired after serving his last thirty-one years at Trinity Chapel in Thorntown, Indiana. Charles was a friend and mentor to young ministers beginning their career. He served on many boards during his ministry and is now an honorary board member of the Indiana District. In retirement, he enjoyed golfing. Charles was a generous and compassionate man who was dedicated to ministry and devoted to family and friends. Survivors include: Wife: Ruth Brinson of Lebanon Daughters: Annette Thatcher of Lebanon Penny (Mike) Bough of Dubois, Indiana Candy Reagan of Lebanon Charlena (Chris) Murphy of Noblesville Son: Joseph Brinson of Palm Springs, California Seven Grandchildren: Jason Allen Seth Reagan Tanner Reagan Mariah Reagan Elijah Enustun Blake Enustun Isabella Enustun Five Great-Grandchildren Sister: LeeEtta (Stanley) Collins of Bedford, Indiana In addition to his parents, Charles was preceded in death by two grandsons, Michael Thatcher and Lucian Allen; one son-in-law, Robert Reagan. Visitation will be held on Thursday, September 5, 2019 from 4:00 p.m. to 8:00 p.m. at Myers Mortuary, 1502 North Lebanon Street, Lebanon, Indiana. Funeral Services will be held on at 1:00 p.m. on Friday, September 6, 2019 at Trinity Chapel Church, 4534 North US Highway 52, Thorntown, Indiana 46071. Interment will follow services at Oak Hill Cemetery in Lebanon, Indiana. Memorials may be made in Charles memory to the Charity of the Donor’s Choice.

Rev. Charles Leland Brinson, 82, passed away on September 2, 2019 at Homewood Health Campus in Lebanon. He was born on September 27, 1936 in Avoca, Indiana, the son of the late Herbert and Vivian (Hall) Brinson. He graduated from Williams High... View Obituary & Service Information

The family of Rev Charles L. Brinson created this Life Tributes page to make it easy to share your memories.

Send flowers to the Brinson family.