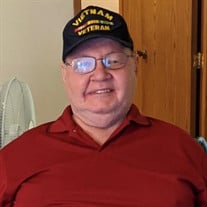 Charles Ronald Isenhour, 81, passed away peacefully at home Tuesday morning, September 28, 2021. He was born May 19, 1940 in Lebanon, Indiana, a son of the late Charles Edwin and Olive Belle (Swigart) Isenhour. Charles was a graduate of Sheridan High School. Following high school, he proudly served his country in the U.S. Army, where he was stationed with 299th combat during the Vietnam era. On June 5, 1966, he was married to Linda Ann (Wiles) Isenhour in Boone County, Indiana. They enjoyed over 52 wonderful years together, before her passing on February 10, 2019. Charles was employed with Central Soya, Inc. for over thirty years. Following retirement, he worked for the Zionsville School Corporation as a custodian for ten years. He enjoyed bowling, water skiing, working on model boats, watching movies, mowing, football, NASCAR, spending time with his animals, and watching Tik Tok videos. Above all else, Charles loved being with his family. Survivors include her daughter, Ronda L. Isenhour of Lebanon; two brothers, Rodney L. and wife, Karen Isenhour of Sheridan, Rex A. Isenhour and wife, Patty of Sheridan, one sister, Ruth Ann Durbin of Sheridan; along with several nieces and nephews. Funeral Services with military rites are planned for 12:00 p.m. on Friday, October 1, 2021, at Myers Mortuary, 1502 North Lebanon Street, in Lebanon, Indiana. Visitation will be held from 10:00 a.m. until the time of service on October 1st at the funeral home in Lebanon. Boone County Crematory has been entrusted with his cremation arrangements following services. Memorials may be made in Charles’ memory to the Alzheimer’s Association Greater Indiana Chapter, 50 East 91st Street, Suite 100, Indianapolis, Indiana 46240-1554 or the Humane Society for Boone County, P. O. Box 708, Lebanon, Indiana 46052.

Charles Ronald Isenhour, 81, passed away peacefully at home Tuesday morning, September 28, 2021. He was born May 19, 1940 in Lebanon, Indiana, a son of the late Charles Edwin and Olive Belle (Swigart) Isenhour. Charles was a graduate of... View Obituary & Service Information

The family of Charles Ronald Isenhour created this Life Tributes page to make it easy to share your memories.

Send flowers to the Isenhour family.