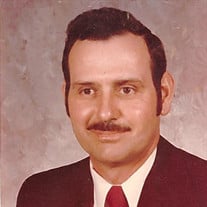 Mr. Charles E. Staton, 89, of Akron, Indiana passed away on January 22, 2021 at The Waters of Lebanon in Lebanon, Indiana. He was born November 2, 1931, a son of the late Clyde and Elizabeth (Owens) Staton. Charles, who spent most of his early years as a resident of Boone county, was a 1949 graduate of Whitestown High School. He excelled in basketball and baseball receiving a scholarship to play at Texas Lutheran College and later an offer to play semi-professional sports, which he could not pursue due to the draft. He served in the United States Army from 1952 – 1954 during the Korean Conflict. He was one of six brothers who served in the U.S. Army. Charles retired from Allison’s Transmission (GM) in 1989 after working there for 35 years. He and his wife, Mary Lou, soon after moved up near Akron, Indiana settling on a small lake lot called Town Lake, living a simple life in the country. They greatly enjoyed the lake, the surrounding wildlife, the Amish community, family and friends in the area for nearly 30 years. He loved fishing, camping, auctions, building and refinishing furniture. He also loved to reminisce about the family fishing trips up to Canada over the years. They were faithful members of the Omega Baptist Church. Survivors include his wife, Mary Lou; three children, Joe (Diane) Staton, Phil (Kathy) Staton and Dianna (Dave) Bartolazzi; one stepdaughter, Susan (Dave) Hughes; thirteen grandchildren and sixteen great grandchildren. In addition to his parents, Charles was preceded in death by five brothers, Owen, William, Roy, Bob and Woodrow, and four sisters, Marie, Louella, Lulu Bell and Dorothy. Memorial Services will be held at a later date at Oak Hill Cemetery in Lebanon. Myers Mortuary and Boone County Crematory have been entrusted with his cremation arrangements.In lieu of flowers, memorials may be given in Charles memory to the charity of the donor’s choice.

Mr. Charles E. Staton, 89, of Akron, Indiana passed away on January 22, 2021 at The Waters of Lebanon in Lebanon, Indiana. He was born November 2, 1931, a son of the late Clyde and Elizabeth (Owens) Staton. Charles, who spent most of his... View Obituary & Service Information

The family of Charles E. Staton created this Life Tributes page to make it easy to share your memories.

Send flowers to the Staton family.