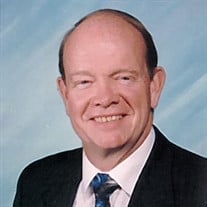 Chester Dean Henson left this life on March 11, 2022. He was 77. Chester, aka Sonny/Chet/Mr. Henson, was born December 8, 1944, in Casey, Illinois, the son of Chester R. and Elizabeth (Ingram) Henson. Chet grew up in Paris, Illinois and later moved to Crawfordsville, Indiana, with his mother and stepfather. He graduated from Darlington High School in 1962 then entered the United States Army in 1963. Sonny returned from his tour of duty in Germany in 1966 and entered Vincennes University earning an Associate in Arts degree. He then enrolled at Purdue University in the school of education. Upon his graduation, Chet taught English at Coal Creek Central K-8 school near New Richmond, Indiana for 18 years. During a short interlude from teaching, Chet owned and operated Clarks Hill Grocery from 1990–1992. From 1992 intermittently through 2014, Chet worked as a technical writer with his good friend Boyd Nightenhelser. The call of education brought Mr. Henson back to teaching at Saint Richard’s School in Indianapolis where he taught 6th grade English and was an administrator at the middle school. After 5 years, Chet returned to technical writing with Boyd until 2000 when he began the autumn and highlight of his teaching career. Mr. Henson taught language arts at Cold Spring, a K-8 Environmental Magnet School in the Indianapolis Public Schools. Here he combined his love of the outdoors with his love of teaching reading and writing. The fall of 2006, Mr. Henson transferred to Crispus Attucks Medical Magnet 6-12 School. Mr. Henson was awed and honored to be teaching at such a historic institution. He commented frequently that those last ten years were the best years of his teaching career, and he was proud to have the opportunity to know and work with all of those students, as well as all of the many hundreds of students he had worked with over his 35 years of teaching. Chet retired from classroom teaching in 2010 but continued to substitute in IPS until 2012 when he returned to again working with and getting “popsicles” for Boyd through 2014. Chet continued to tutor students individually until the last lesson plan. Sonny is survived by his mother, Elizabeth Bryant; son, Jeff Henson; and daughter, Elizabeth (Henson) Turner. He was divorced from two previous marriages, Nancy (Virgin) Henson and Deborah (Chafin) Henson. He is also survived by three grandchildren, Nick Henson, Cheyenne Henson, and Isla Thornton; a brother, Wayne Bryant; and friend, Pricilla Bates. Funeral services are planned for 2:00 p.m. on Saturday, March 19, 2022, at Myers Mortuary, 1502 North Lebanon Street, in Lebanon, Indiana. The family will greet friends from noon until the time of service. Interment will follow at Oak Hill Cemetery in Lebanon. Memorial contributions may be directed to Indy Reads of Indianapolis. Online condolences: MyersMortuary.com

Chester Dean Henson left this life on March 11, 2022. He was 77. Chester, aka Sonny/Chet/Mr. Henson, was born December 8, 1944, in Casey, Illinois, the son of Chester R. and Elizabeth (Ingram) Henson. Chet grew up in Paris, Illinois and later... View Obituary & Service Information

The family of Chester Dean Henson created this Life Tributes page to make it easy to share your memories.

Send flowers to the Henson family.