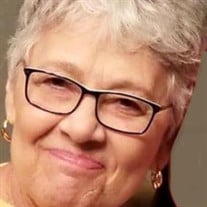 Mrs. Cynthia Jo “Cindy” Zimmerman, 68, passed away peacefully on Tuesday, March 30, 2021, at her home in Lebanon, Indiana. She was born December 12, 1952, in Fort Wayne, Indiana; a daughter of the late Gene D. and Barbara Ann (Kuntz) Lockwood. She was a 1971 graduate of Dekalb High School in Waterloo, Indiana. She married Douglas Richard Swick in Auburn, Indiana. Together they had two daughters. Cindy later married Richard Lee Zimmerman on February 2, 1985, together they shared 36 loving years before he passed away on July 2, 2020. Cindy was a longtime Lebanon resident and was employed with Lebanon High School for 10 years. She was a kind, caring and patient person who enjoyed sewing, fishing and camping. More than anything she loved her grandchildren and enjoyed attending all their activities. Survivors include two daughters: Kimberly Welch of Fort Wayne and Kelley (Jason) Terrill of Lebanon; grandchildren: Elijah Seslar, Kaitlyn Welch, Jacqueline Terrill, Andrew Terrill, and Zachary Terrill. In addition to her parents and husband, Cindy was preceded in death by a sister, Vicki Lockwood. In honor of her wishes, no services are planned. Myers Mortuary and Boone County Crematory have been entrusted with her cremation arrangements. Memorials may be given in Cindy’s memory to Lebanon Sports Boosters Association: 510 Tiger Way, Lebanon, IN 46052, or to the Indiana Donor Network: 3760 Guion Rd, Indianapolis, IN 46222.

The family of Cindy Zimmerman created this Life Tributes page to make it easy to share your memories.

Send flowers to the Zimmerman family.