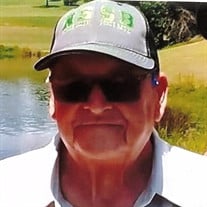 Mr. Cleo Yarber, 76, passed away peacefully at his home in Lebanon, Indiana, on Tuesday, March 31, 2020, surrounded by his loving family. He was born July 30, 1943 in Lebanon, a son of the late Bert and Ruth (Boliard) Yarber. On June 5, 1971, he married Betty (Engle) Napier Yarber in Gallatin, Tennessee. She preceded him in death on May 4, 2013. Mr. Yarber worked as a farmer and truck driver. For a period of time he worked at Woods Wholesale. He served as a volunteer fireman for Van Bibber and as a dispatcher and reserve deputy for the Putnam County Sheriff’s office. He retired in the early 2000s to enjoy fishing, golfing, traveling and being with his family, friends, and beloved Rusty Dog 2. Survivors include, his significant other, Mary Creason of Florida; children, Lynnetta (Yarber)Boice of Lebanon, Joanne (fiancé, Chuck Biddle) Martin of Lebanon, Shane (Vanessa) Yarber of Corbin, Kentucky, Bobby (Tonya) Williams of Camby, Debbie (Ron) Bryant of Kokomo, James Williams of Hartford City, Jeff Price of Kokomo, Jerry Price of Pendleton, Karen Schmidt of Forest, Ronnie (Tresa) Smith of Louisville, Kentucky, and Richard Parkinson of Brazil; many grandchildren, great grandchildren and great great grandchildren. In addition to his parents and his wife, Cleo was preceded in death by two brothers, Albert Yarber and Russell Yarber; in-laws, Luster and Anna Mae Engle; a daughter, Lois Ann Morgan; and his beloved Rusty Dog 1. Private Family Funeral Services will be held on Saturday, April 4, 2020 at Myers Mortuary in Lebanon, Indiana. Interment will follow services at Lincoln Memory Gardens in Whitestown, Indiana. Memorials may be made to the charity of the donor’s choice.

The family of Cleo Yarber created this Life Tributes page to make it easy to share your memories.

Mr. Cleo Yarber, 76, passed away peacefully at his home in Lebanon,...

Send flowers to the Yarber family.