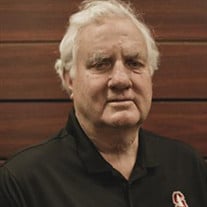 Daniel Leith Anderson Jr. was known to declare: “I just want to be remembered for my BBQ ribs”. If that was his life’s ambition, he fulfilled it, but he also fulfilled much more. Whether BBQ, golf, computers, or leather goods, his drive and energy were focused on his craft. His care and sensitivity, however, were directed toward people. Throughout his life, Leith was a friend and mentor to many. He offered guidance and encouragement to family, friends, colleagues, and students, all with equal regard. He stressed the importance of relationships and gathered a collection of business cards that seemed to live in every one of his drawers and pockets. Leith died at home on December 4, 2019 - just a few weeks short of his 75th birthday. He had many plans for the future, but even though he may not have been ready to go, he lived to work and there is solace in the fact that he was able to do so for the vast majority of his life. Leith was born on New Year’s Day, 1945 – the eldest son of Daniel and Dorothy Anderson. He grew up in Hinsdale Illinois, a championship swimmer and golfer. During the 1960s, he developed his charisma, curiosity, and sense of mischief leading canoe trips with Outward Bound and playing on the golf team at Stanford University. After graduating in 1969, he spent two years in Honduras with the Peace Corps, where he met his wife of 39 years, Bonnie Anderson. Together Leith and Bonnie moved to Indiana and started a business selling beads and making handcrafted leather goods. Leith cultivated an array of collections throughout his life, admiring the artisanal skills reflected in each piece. A characteristic conversation with him might include a description of the unique details that earned each item its place in the collection. Leith and Bonnie were partners in more than business and started their family in Bloomington, Indiana. Leith’s ventures into computer consulting brought the family west to Palo Alto, California where he continued in software marketing, and eventually, golf club fitting. He thrived on looking for the next innovation and being on the cutting edge of the field. The family eventually left Palo Alto, bringing Leith back to Dan and Dorothy’s farm in Whitestown Indiana. Leith had the opportunity to spend valuable time at the farm with his mother until her death in 2016. Together they enjoyed going to plays and movies, and having long talks at the kitchen table. In Palo Alto, Leith started the Golf Lab, a club-fitting business that brought people together as much as it supplied them with golf clubs. After moving back to Indiana, he joined forces with Correct 2 Compete where he built up a devoted clientele, fitting players from near and far with custom clubs. He also experimented with new technologies aimed at improving focus and performance. He eventually focused on the discipline of putting with the Indy Putting Lab. This trajectory is reflected in his newsletters. Over the years, he traded snail mail, licked and stamped by an assembly line of family members, for an email list he could reach with a single click. He carefully curated the content of his messages, aiming to create value for his readers and anticipate trends in the industry. Other interests included politics, economics, and of course, the everlasting art of grilling, smoking, and barbecue. Leith excelled in cultivating relationships outside of the workplace. He loved big dinner parties and was known to have everyone switch seats halfway through a meal, “just to keep things interesting.” Leith’s children and siblings formed their own families across the country. Son Daniel Ryan Anderson, married to Jen, lives in Durham, North Carolina, along with their son, Parker. Daughter Brett Anderson, engaged to Edward Breckenridge, lives in Los Angeles, California. Leith’s former wife Bonnie Anderson, with whom he maintained a close connection, also lives in Durham, North Carolina. Sister Christie VanSteenwyk is nearby in Fishers, Indiana. Sister Gayle Anderson is with spouse Matthew Greenwood in Sarasota, Florida. Youngest sister Elizabeth Anderson Shatner lives in Los Angeles, California. Nephew Judd Davis lives in Bloomington, Indiana and niece Melissa Swain is with husband Matthew in Rochester Hills, Michigan. One brother, Scott Anderson, passed away in 2010. A celebration of Leith’s life will take place in June 2020 at the Anderson family farm in Whitestown, IN. For information, please contact [email protected] Arrangements were handled by Myers Mortuary in Lebanon.

Daniel Leith Anderson Jr. was known to declare: &#8220;I just want to be remembered for my BBQ ribs&#8221;. If that was his life&#8217;s ambition, he fulfilled it, but he also fulfilled much more. Whether BBQ, golf, computers, or leather goods,... View Obituary & Service Information

The family of Daniel Leith Anderson, Jr. created this Life Tributes page to make it easy to share your memories.