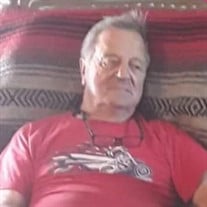 Mr. Daniel A. Earl, 83, passed away on Saturday, September 25, 2021, at Witham Memorial Hospital in Lebanon, Indiana. He was born in Indianapolis on September 18, 1938, a son of the late Clyde P. and Delma M. (Emerick) Earl. In 1955, he was married to Geraldine L. (Shinkle) Earl in Indianapolis, they divorced. Then on May 27, 1995, he was married to Ernesteen “Tina” (Allen) Earl in Florida. She preceded him in death on June 25, 2012. Raised in Indianapolis, Dan graduated from the Indianapolis Public Schools. Following school, he served his country honorably in the United States Army. Dan owned and operated Earl’s Garage in Lebanon for more than 30 years. He was a member of Lighthouse Christian Fellowship in Brownsburg. He enjoyed traveling, riding his Harley motorcycle, and attending the rally at Sturgis. Dan was a devoted husband, father, grandfather, great grandfather, and friend to many. He had a special place in his heart for his dog, Pepper. Survivors include, four children, Douglas R. Earl, Kimberly S. Veach, Mary M. Akin, all of Lebanon; stepdaughter, Glenda M. (Don) Pharis of Thorntown; seven grandchildren, Daniel (Missi) Veach, Nicole (Neil) Hollingsworth, Michael A. Akin, William R. Earl, Amanda C. Earl, Sean D. Veach, and Jeremy E. Akin; several stepchildren and step grandchildren; two brothers, Ralph (Barbara) Earl of Madison, Indiana and Don Earl of Indianapolis. In addition to his parents and his wife, he was preceded in death by three children, Daniel E. Earl, Piper S. Earl, and William R. Earl. Funeral Services are planned for 3:00 p.m. on Friday, October 8, 2021, at Myers Mortuary, 1502 North Lebanon Street, in Lebanon, Indiana. Visitation will be held from 1:00 to 3:00 p.m. on Friday. Interment will follow services at Bethesda Cemetery in Brownsburg, Indiana. Memorials may be directed to Myers Mortuary to assist the family.

The family of Daniel A. Earl created this Life Tributes page to make it easy to share your memories.

Send flowers to the Earl family.