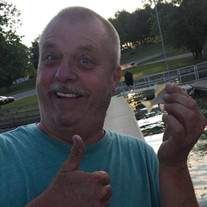 Darrell Wayne Hart, 60, passed away Sunday, August 9, 2020 at Witham Memorial Hospital in Lebanon, Indiana. He was born on November 4, 1959 in Greencastle, Indiana, the son of Sharon (Leake) Nichols and the late Frank Hart. He graduated from Lebanon High School in 1979. On August 24, 1990, he was married to Kimberly A. (Neese) Hart in Shepherdsville, Kentucky; she survives. Darrell worked for Hendrickson Trailer for the past 25 years as the purchasing agent and coordinator of their corporate events. He loved working on cars especially his own muscle cars. He managed the Back to the Fifties Festival car show for many years. In addition, he liked to camp and fish in his free time. Darrell was a loving husband, father, and grandfather. Survivors include his, wife: Kim A. Hart of Lebanon; mother: Sharon Nichols of Plainfield; two children: Brandon Hart and companion, RaeAnn Bushong of Lebanon and Kaitlin Hart and companion, Jordan Keesling of Jamestown; two grandchildren: Carson Hart and Tinsley Bushong; sisters: Vicki (Gerry) Thompson of Russellville and Nicole Nichols-Smith of Brownsburg; half siblings: Frankie (Stephanie) Hart of Ladoga, Eby (Tom) Hart of Crawfordsville, and Lynn Smith of Crawfordsville; father and mother-in-law: Don and Sheila Neese of Lebanon; sister-in-law: Melodie Riley of Brownsburg; and several nieces and nephews. In addition to his father, Darrell was preceded in death by his stepfather, Jerry Nichols who raised him; and a sister, Debra Thompson. Funeral Services are planned for 4:00 p.m. on Thursday, August 13, 2020 at Myers Mortuary, 1502 North Lebanon Street, Lebanon, Indiana. Visitation will begin at 2:00 p.m. until the time of service at 4:00 p.m. on Thursday. Interment will follow services at Browns Wonder Cemetery in Lebanon. Memorials may be directed in his memory to the Boone County Cancer Society, 117 West Elm Street, Lebanon, Indiana 46052.

Darrell Wayne Hart, 60, passed away Sunday, August 9, 2020 at Witham Memorial Hospital in Lebanon, Indiana. He was born on November 4, 1959 in Greencastle, Indiana, the son of Sharon (Leake) Nichols and the late Frank Hart. He graduated from... View Obituary & Service Information

The family of Darrell W. Hart created this Life Tributes page to make it easy to share your memories.

Send flowers to the Hart family.