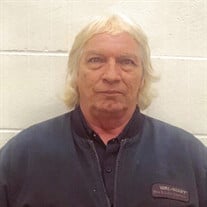 Darryl Wayne Cain, 65, of Elizaville, passed away peacefully on Tuesday, October 13, 2020 at St. Vincent Hospital in Indianapolis, Indiana. He was born in Crawfordsville, Indiana on December 22, 1954, a son of the late Harold L. and Charlotte (Darwactor) Cain. He is survived by his loving wife, Becky L. (Miller) Cain. They were married on November 19, 1976 in Elizaville, Indiana. Darryl was a 1973 graduate of Thorntown High School. He began his employment for Montgomery Wards in Lebanon. He later worked as a custodian for Lebanon High School and following that was an auto mechanic at Lebanon Wal-Mart. He attended Elizaville Baptist Church from time to time. His hobbies included working on cars, tinkering in his garage, and watching John Wayne movies. He enjoyed family outings and adored his grandchildren, who gave him the nickname “Pot.” Survivors include his wife, Becky Cain of Elizaville, Indiana Children: Josh A. (Tina) Cain of Elizaville, Indiana Rachel R. (Aaron) Clark of Lebanon, Indiana Three Grandchildren: Aaron Clark, II Elizabeth Clark Allison Clark Brother: Gary (Teresa) Cain of Thorntown Sisters: Mary Jane Cain of Darlington Pamela (Jim) Warmoth of Thorntown Brother-in-Law: Morris “Beetle” Bailey of Thorntown Several Nieces and Nephews Deceased: In addition to his parents, Darryl was preceded in death by a sister, Linda Lou Bailey. Funeral Services are to be held at 11:00 a.m. on Saturday, October 17, 2020 at Myers Mortuary, 1502 North Lebanon Street in Lebanon, Indiana. Visitation will take place on Saturday, October 17 from 9:00 a.m. to 11:00 a.m. at the funeral home in Lebanon. Interment will follow services at Hopewell Cemetery in Lebanon. Memorials may be made in his honor to the charity of the donor’s choice.

Darryl Wayne Cain, 65, of Elizaville, passed away peacefully on Tuesday, October 13, 2020 at St. Vincent Hospital in Indianapolis, Indiana. He was born in Crawfordsville, Indiana on December 22, 1954, a son of the late Harold L. and Charlotte... View Obituary & Service Information

The family of Darryl "Pot" W. Cain created this Life Tributes page to make it easy to share your memories.

Send flowers to the Cain family.