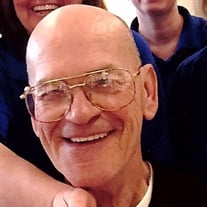 David Joseph Wagoner, 72, passed away Sunday night, March 14, 2021, at Witham Memorial Hospital in Lebanon, Indiana. He was born in Lebanon on February 5, 1949, a son of the late Ray Leon and Mae Dunn (Baker) Wagoner. Raised in Lebanon, Joe attended Lebanon High School. He moved to Oceanside, California in 1968 and lived there until 1975 before moving back to Lebanon. On October 29, 1977, he was married to Mary Catherine “Cathy” (Dickey) Wagoner in Lebanon, they had shared 40 loving years together before she passed away on June 12, 2017. Joe worked as a custodian for the Lebanon Community School Corporation for several years. He had also worked for Pizza Hut in Lebanon and for a period of time he delivered newspapers for the Lebanon Reporter and Indianapolis Star. He was of the Baptist faith. He deeply loved his family especially his granddaughters. Survivors include his son, Steven Lee (Samantha) Wagoner of Greenfield; three granddaughters, December Rayne Wagoner, Avironna Mae Wagoner of Kokomo, Cheyanne Marie Wagoner of Greenfield; two brothers, Larry (fiancée, Deborah Savage) Wagoner of Sheridan and Steve (Pam) Wagoner of Lebanon; nieces and nephews, Buster Wagoner, Brea Wagoner, Robert Sullivan, Daniel Rose, Jennifer Baumgart, and Richelle Wagoner; and several great nieces and nephews. In addition to his parents and his wife, Joe was preceded in death by his sister, Kay Black. Funeral Services are planned for 1:00 p.m. on Friday, March 19, 2021 at Myers Mortuary, 1502 North Lebanon Street, Lebanon, Indiana. Visitation will be held from 11:00 a.m. until time of service at the funeral home in Lebanon. Interment will follow services at Browns Wonder Cemetery, in Lebanon. Memorials may be made in his memory to the Hattie B. Stokes Food Pantry in Lebanon or the Open Arms Food Pantry at the Church of God in Sheridan, Indiana.

The family of David Joe Wagoner created this Life Tributes page to make it easy to share your memories.

Send flowers to the Wagoner family.