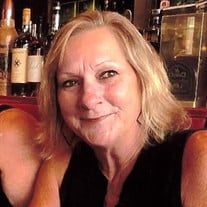 Debra Dawn Jarvis, 65, passed away Friday, January 21, 2022, at her home in Lebanon, Indiana. She was born on February 1, 1956, in Bargersville, Indiana; a daughter of Rosalyn Barbara (Clark) Smith and the late Melvin Delmer Pollard. On October 17, 1996, she was married to Troy S. Jarvis in Mulberry, Indiana; he survives. Debbie was a 1974 graduate of Thorntown High School where she was crowned homecoming queen her senior year. She had worked in insurance for a period of time and for the last 20+ years, was a paint inspector at Subaru in Lafayette. Family was the most important thing to Debbie. She loved her children and absolutely adored her grandchildren. She enjoyed cooking, gardening, and working puzzles. Survivors include her husband, Troy Jarvis of Lebanon; mothe,: Rosalyn Smith of Thorntown; five children, Nicole (Zach) Smith of Thorntown, Danelle (Barry) Gillan of Thorntown, Elizabeth Akers–Jarvis of Frankfort, Chelsea (Zach) Garland of Lebanon, and Devin Jarvis of Lebanon; sixteen grandchildren; sister, Julie Toney of Thorntown; brother, Garry (Cindy) Pollard of Thorntown; half brother, Alvin (Angie) Smith, II of Thorntown; and many nieces and nephews. In addition to her father, Debbie was preceded in death by a brother, Randy Pollard; stepfather, Alvin Smith; and brother-in-law, Phillip Toney. Funeral Services are planned for 12:00 Noon on Saturday, January 29, 2022, at Myers Mortuary, 1502 North Lebanon Street in Lebanon, Indiana, with visitation from 10:00 a.m. until the time of services. Interment will follow at Oak Hill Cemetery in Lebanon. Memorials may be made in her memory to the Humane Society for Boone County, P.O. Box 708, Lebanon, Indiana 46052 or Wounded Warrior Project, P.O. Box 758516, Topeka, Kansas 66675-8516.

Debra Dawn Jarvis, 65, passed away Friday, January 21, 2022, at her home in Lebanon, Indiana. She was born on February 1, 1956, in Bargersville, Indiana; a daughter of Rosalyn Barbara (Clark) Smith and the late Melvin Delmer Pollard. On... View Obituary & Service Information

The family of Debra D. Jarvis created this Life Tributes page to make it easy to share your memories.

Send flowers to the Jarvis family.