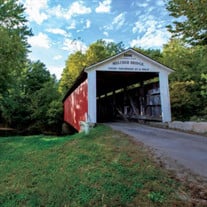 Delbert Leon Robertson Jr., 70, (aka Butch, aka dad, aka proud pap-paw) of Crawfordsville, IN, passed away peacefully, on April 3rd, 2022, at Signature Healthcare Parkwood, in Lebanon, Indiana. He was born bad to the bone, Buh-buh-buh-buh-Bayud, in Lafayette, IN on February 22, 1952, to the late Delbert L. Robertson Sr. and Arlene (Stover) Robertson. He was the first of 5 children, was the 'best looking, smartest, most loved,' (most stubborn, and orneriest too) Butch attended Crawfordsville High School. He started studying music theory from the time he was able to walk- until, well, even when he wasn’t able to walk. Butch was employed as a “garbologist” for a few years, and was an even better, all-over-the-road semi-truck driver, which was much more successful than his short-lived swimsuit modeling career. He was the biggest Beatles and John Lennon fan anyone has ever met, and a true musical vault- when it came to the music he enjoyed. He could tell you everything about his favorite bands, even when you didn’t care to know. He had an awesome sense of humor; he was the light and life of the party. Some of his favorite hobbies included muscle cars, baberham’s, watching cars go left in a circle for far too long, hootin' and a hollarin', old westerns, shredding the guitar, rippin' on all the groovers, jammin his tunes loud, and being at every appointment 2 hours early. Butch was very light-hearted and loved to joke to make people laugh, rather than being super serious all the time. For example, he named one of the family dog's, "Sir Dumps A Lot." He was a true ‘Merican’, a devoted and loyal friend, faja, son, brother, and especially grandfather. He is survived by a daughter, Michelle Robertson, (Joshua Williams); grandchildren; Liam, Coen, Gunnar, Felix, & Vela Moon, of Kingman, IN; Son, Sean Tyrrell (Sarah Kessinger) of Veedersurg, IN; grandchildren; Jake, Jeremiah, Cambria, Rylin & Lynkin. He was greeted home by his first son, Peter Shotts. If you'd like to come celebrate the Man, the Myth, the Legend with us, a memorial service will be held at the Waveland Schoolhouse Storage and Venues, located at 506 Green St., Waveland, IN 47989 May 7th from 12 noon till 3pm. We all love you pops. You helped facilitate many with the reality of this musical universe, life's hard knocks, ingenious witty charm and wisdom, that only an old soul could know. His consciousness returned back home to the Great Beyond, with love, to soar throughout the cosmos. Until we meet again. Myers Mortuary and Boone County Crematory are entrusted with his cremation arrangements.

Delbert Leon Robertson Jr., 70, (aka Butch, aka dad, aka proud pap-paw) of Crawfordsville, IN, passed away peacefully, on April 3rd, 2022, at Signature Healthcare Parkwood, in Lebanon, Indiana. He was born bad to the bone, Buh-buh-buh-buh-Bayud,... View Obituary & Service Information

This obituary was kindly submitted from the family

Send flowers to the Robertson family.