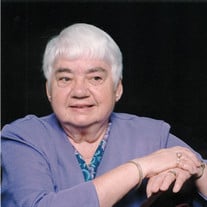 Delores Eileen (Lane) Rutherford, 95, longtime Boone County resident, peacefully passed away in her sleep on January 13, 2020. She was born February 22, 1924 in Sheridan, Indiana to Paul Leon Lane and Opal (Green) Lane. She had two younger sisters; Louise (Lane) Thistlethwaite, who passed away in 2018, and Helen (Lane) Herrmann, currently living in Lebanon. She was preceded in death by her husband Wilson (Bill) Rutherford. They had one daughter Barbara Jeanne (Rutherford) Clark. Barbara, along with her husband Joe, currently split their time between Ocala, Florida and Lebanon, Indiana. Delores served in the Waves during WWII as a Pharmacists Mate. She was stationed at the San Diego Naval Hospital in California. Bill and Eileen, as her family knew her, lived on a farm in Big Springs, Indiana and were known for raising Registered Black Angus show cattle. Delores worked 32 years for Indiana Bell Telephone and retired in 1979. She served as President of the local Business Professional Women's organization and was a member and held several positions in the Telephone Pioneers of Indiana. They spent their early years of retirement in Okeechobee, Florida before returning to Lebanon in 1999. Funeral Services will be held at 2:00 p.m. on Saturday, January 18, 2020 at Myers Mortuary, 1502 North Lebanon Street, Lebanon, Indiana. Visitation is planned for Saturday, from noon until the time of service at the funeral home in Lebanon. Interment will follow services at Oak Hill Cemetery in Lebanon, Indiana. Memorials may be made to the charity of the donor’s choice. Online condolences: www.myersmortuary.com

The family of Delores Eileen Rutherford created this Life Tributes page to make it easy to share your memories.

Send flowers to the Rutherford family.