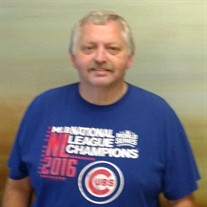 Mr. Dennis L. Robinett, 57, passed away after a courageous battle with cancer at his home in Lebanon on Tuesday, November 2, 2021. He was born in Anderson, Indiana on May 12, 1964; a son of Linda (Porter) Robinett and the late Charles “Chuck” Robinett. He was a 1982 graduate of Anderson High School. Following high school Dennis worked for H & R Block in Monticello, Indianapolis and Lebanon. He was a dedicated employee in the produce department with Kroger in Lebanon and later with Meijer in Whitestown as a shift manager. Dennis attended Lebanon Rock Church in Lebanon. He loved spending time with his family and enjoyed traveling, boating, relaxing in his recliner and watching T.V. He was an avid Cubs and Bears fan who had a heart of gold and was a loving father, grandfather and son who will be greatly missed. Survivors include his mother, Linda Robinett of Anderson; companion, Emma Nulf of Lebanon; three children, Grant A. (Lisa) Robinett of Anderson, Brittanie M. Mechem of Anderson, Travis M. Robinett of Anderson; six grandchildren, Corey Robinett, Collin Thompson, Ryan Williams, Kyrie Robinett, Sophie Mechem and Ryder Mechem. Visitation will take place from 4:00 p.m. to 7:00 p.m. on Friday, November 5, 2021, at Myers Mortuary, 1502 North Lebanon Street, Lebanon, Indiana. Funeral Services are to be held at 11:30 a.m. on Saturday, November 6 with additional visitation an hour before services at the funeral home in Lebanon. Interment will be held following services at Maplewood Cemetery in Anderson, Indiana. Memorials may be given in his memory to the charity of the donor’s choice.

The family of Dennis L. Robinett created this Life Tributes page to make it easy to share your memories.

Mr. Dennis L. Robinett, 57, passed away after a courageous battle...

Send flowers to the Robinett family.