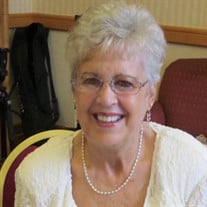 Diane S. (Beaman) Martin, 76 passed away at Signature HealthCare at Parkwood surrounded by her family on November 10, 2019 following a very long and difficult battle with Parkinson’s Disease. Diane was born on October 7, 1943 to Fay and Esther (Sortor) Beaman. She was a 1962 graduate of Lebanon High School. While in high school, Diane was introduced to Irvin Martin by her mother and Irvin became the love of her life. Irvin and Diane were married on November 25, 1962 and celebrated 54 anniversaries before his death Jan 29, 2016. They were the proud parents of Gloria, Brian and Angela. Diane was known for her beautiful smile and cheerful personality. She enjoyed sewing and arts and crafts, but more than anything else, she loved her family! She was a 60-year member of the Lebanon First Baptist Church. She worked as a Teacher’s Aide at Central Elementary while the children were in school and then worked at H & W Supply Company. She ended her career as a receptionist at Lifework Medical Group. Diane was predeceased by her parents and her husband. She is survived by her siblings Ron (Linda) Beaman, Lebanon, Dennis (Elaine) Beaman, Greenwood and Linda McClaine (Amos Greeson), Lebanon. She also leaves behind three children, Gloria (Scott) Jensen, Carmel, Brian Martin, Indianapolis, and Angela (William) Minglin, Logansport. She was loved very much by her six grandchildren, Brandon (Misty) Minglin, Eric Roesch, Kathryn Roesch, Kristen Minglin, Danielle Martin and Trevor Martin, and great-grandson, Rylan Smith. She also leaves several nieces and nephews. Additionally, there were many caregivers at Parkwood who loved Diane like she was family. Visitation is planned from 2 pm – 6 pm on Sunday, November 17, 2019 at Myers Mortuary, 1502 North Lebanon Street, in Lebanon, Indiana. Funeral Services will be held at 11 am on Monday, November 18 at the funeral home. Burial will be alongside her husband, Irvin, at Oak Hill Cemetery in Lebanon. In lieu of flowers, please consider a donation in Diane’s name to Lebanon First Baptist Church or American Parkinson’s Disease Association.

Diane S. (Beaman) Martin, 76 passed away at Signature HealthCare at Parkwood surrounded by her family on November 10, 2019 following a very long and difficult battle with Parkinson&#8217;s Disease. Diane was born on October 7, 1943 to Fay... View Obituary & Service Information

The family of Diane S. (Beaman) Martin created this Life Tributes page to make it easy to share your memories.