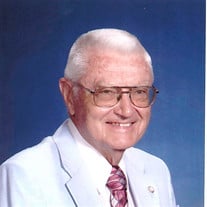 Donald Henry Hudson, 92, of Jamestown, Indiana, passed away Wednesday, February 20, 2019, at Homewood Health Campus in Lebanon. He was born in Waynetown, Indiana, on December 27, 1926, the son of the late Moreland and Henrietta (Ellingwood) Hudson. He graduated from New Ross High School. Following school, he served in the United States Navy during WWII until 1946 when he was honorably discharged. Upon his return, he attended IUPUI. On April 12, 1947, Donald married the love of his life, Iris B. (Jones) Hudson, in Darlington, Indiana. Iris survives and they enjoyed over 71 years of marriage together. He retired in 1982 from Allison Division of General Motors as superintendent of quality assurance after 31 years of service. He was an active member of New Brunswick Church of Christ and involved with missionary trips to Haiti. He travelled to Haiti three times in addition to fixing and shipping over 100 sewing machines for the people there to make a living. In addition, he taught Sunday school classes for more than 58 years and served as an Elder for many years. Donald was a roofer, carpenter, house builder and all around skilled handy-man. He was devoted to his wife, children and grandchildren and loved each of them dearly. Survivors include: Wife: Iris B. Hudson of Jamestown, Indiana Son: John R. Hudson of Lebanon, Indiana Two Daughters: Diana (David) Mahoy of Lebanon, Indiana Terri (David) DeNeal of Lebanon, Indiana Ten Grandchildren Thirty Great Grandchildren Four Great-Great Grandchildren In addition to his parents, Donald was preceded in death by a sister, Arvella Hardwick; brother-in-law, John Hardwick; and a daughter-in-law, Anne Hudson. Visitation is planned from 10:00 a.m. to 12:00 noon on Saturday, February 23, 2019 at New Brunswick Church, south of Lebanon, Indiana. Funeral Services will be held at 12:00 noon on Saturday at the church with Pastor Mark Clark, officiating. Interment will follow services at I.O.O.F. Cemetery in Jamestown, Indiana. Memorials may be directed to the New Brunswick Church of Christ Building Fund, 6480 South State 39, Lebanon, Indiana 46052.

Donald Henry Hudson, 92, of Jamestown, Indiana, passed away Wednesday, February 20, 2019, at Homewood Health Campus in Lebanon. He was born in Waynetown, Indiana, on December 27, 1926, the son of the late Moreland and Henrietta (Ellingwood)... View Obituary & Service Information

The family of Donald H Hudson created this Life Tributes page to make it easy to share your memories.

Send flowers to the Hudson family.