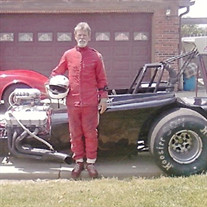 Donald Joseph “Joe” Pratt, Jr., 66, passed away unexpectedly on Sunday, February 20, 2022 at St. Vincent Heart Hospital in Indianapolis, Indiana. He was born in Lebanon, Indiana on January 17, 1956; the son of Donald J. Pratt, Sr. and Esther Ruth (McDaniel) Pratt. He attended Lebanon High School and graduated while serving his country honorably in the United States Marine Corps. On February 23, 1996 he was married to Kandi R. (Frye) Pratt in Boone County, Indiana; she survives. Joe was a member of the Zionsville American Legion. He retired from Carpenters Local 60 as a union carpenter. He was also a licensed driver for NHRA racing. He was a devoted son, husband, father, and grandfather who will be deeply missed by all who knew him. Survivors include his wife, Kandi of Lebanon; father, Don J. Pratt and wife, Joyce of Eustis, Florida; mother, Esther Pratt of Lebanon; daughter, Ashley (Kevin) Van Den Kerkhof of Carlsbad, California; grandchildren, Grayson and Ashton. Joe was preceded in death by a sister, Donna Vandivier. In honor of Joe’s wishes, a Celebration of Life will be held at a later date. Boone County Crematory has been entrusted with cremation. Memorials may be made to the Lebanon Eagles #2062, 2140 North Lebanon Street, Lebanon, Indiana 46052.

The family of Donald "Joe" Joseph Pratt Jr. created this Life Tributes page to make it easy to share your memories.

Send flowers to the Pratt family.