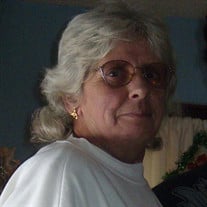 Donna Sue Swaim, 65, of Frankfort, Indiana, passed away Sunday, December 6, 2020, at Witham Memorial Hospital in Lebanon. She was born March 9, 1955, in Frankfort, Indiana, a daughter of the late Fredrick Weber, Sr. and Ina Love (Keever) Weber. In 1998, she married her longtime companion, Larry “Rex” Swaim, before his passing in 1999. Raised in Clinton County, Donna was a graduate of Clinton Prairie High School. She worked as a nurse’s aide for area nursing homes and private in-home healthcare. She also worked as a receptionist for Reith Riley Construction for a period of time. Her hobbies included spending time with her grandchildren, drinking coffee, puzzles of all kinds, and being outdoors when the weather was nice. She was a loving wife, mother, grandmother and great grandmother who cherished her family dearly. Survivors include three sons, Peter (Becky) Abbott, Tracy (Darla) Abbott, and Larry (January) Abbott; five grandchildren, Rusty (Heaven) Abbott, Levi Abbott, Cody Barnes, Luxann Abbott, and Rusty (Heaven) Abbott; two great grandchildren, Landyn Abbott and Skylar Abbott; and sisters, Mildred Weber and Linda (Michael) Perrine. In addition to her parents and her husband, Donna was preceded in death by her brothers, Charles (Sandy) Ambler, Russell Ambler, Fred Weber, Jr., Merl Weber, and one sister, Mary (Mitchel) Eldridge. No services are planned. Myers Mortuary and Boone County Crematory have been entrusted with her cremation arrangements. Memorials may be made in her memory to We Care Kokomo, 519 N Main St, Kokomo, IN 46901 or to any Humane Society.

The family of Donna Sue Swaim created this Life Tributes page to make it easy to share your memories.

Send flowers to the Swaim family.