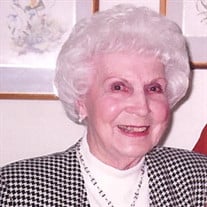 Mrs. Doretha Mae “Dee” Rhodes, 93, passed away on Friday, January 21, 2022, at Signature Healthcare at Parkwood in Lebanon, Indiana. She was born in West Monterey, Pennsylvania on March 19, 1928; a daughter of the late Lee and Alice Catherine (Everett) Kriebel. Dee was married to Elmer “Bub” Johnson and later divorced. On May 1, 1972, she was united in marriage to Robert F. “Rocky” Rhodes in Mechanicsburg, Indiana. He passed away on March 26, 2007. She enjoyed working as a waitress at Miller’s in Colfax for many years. She was a longtime member of Hope Community Church in Lebanon. Dee was a dedicated wife, mother, grandmother, and great grandmother. She enjoyed cooking and baking for her family. In addition, she liked decorating, cleaning, crafting, and flower gardening. . Survivors include, daughter, Diana Beason of Lebanon; stepchildren, Lance (Teresa) Rhodes of Fortville, Indiana, Keith Rhodes of Florida, and Sandra (Michael) Garcia of Colorado Springs, Colorado; five grandchildren; eight great grandchildren; five great great grandchildren; brother, Rodney (Patti) Kriebel of Parker, Pennsylvania; sisters-in-law, Jean Kriebel of Parker, Pennsylvania and Kathy Kriebel of Butler, Pennsylvania; and several nieces and nephews. In addition to her parents and her husband, Dee was preceded in death by a daughter, Dixie Wynkoop, sons-in-law, Ronald Wynkoop and Dale Beason; five brothers, Lee Kriebel, Jr., Bob Kriebel, Bruce Kriebel, Ray Kriebel, and Terry Kriebel; and her sister, Arvella Horner. Funeral Services will be held at 2:00 p.m. on Thursday, January 27, 2022, at Myers Mortuary 1502 North Lebanon Street, in Lebanon, Indiana. Visitation is planned for Thursday from 12:00 p.m. until the time of service at the funeral home in Lebanon Interment will follow services at Browns Wonder Cemetery in Lebanon. Memorials may be directed to the charity of donor’s choice.

The family of Doretha M. "Dee" Rhodes created this Life Tributes page to make it easy to share your memories.

Send flowers to the Rhodes family.