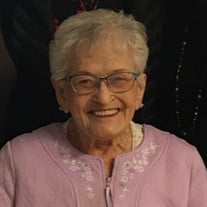 Mrs. Doris Marie Carr, 93, of Jamestown, Indiana, passed away Tuesday night, April 21, 2020 at Brownsburg Meadows. She was born December 27, 1926 in Hamilton County, Indiana, one of several children to the late Wessie and Emma A. (Helfer) Walker. Raised in Boone County, she was a 1945 graduate of Whitestown High School. On June 26, 1948, she was married to L. Cooper Carr in Boone County, Indiana. He preceded her in death on September 1, 2004. The Carr’s had owned and operated the Jamestown Liquor Store 1963-1974. Doris had also worked at Adler’s in Lebanon and part-time at Walmart in Lebanon during her retirement. She was a devoted wife, mother, grandmother, and great grandmother. She loved to cook especially for her family. Survivors include her son, Jerry Carr and wife, Marilyn of Jamestown; two grandchildren, Paula J. Starcher and husband, Don of Crawfordsville and Paul J. Carr, Jr. of Treasure Island, Florida; step granddaughter, Heather Daffron and husband, Scott of Downey, Idaho; four great grandchildren, Zachary P. Baringer of Advance, April N. Severe of Lebanon, Hannah Severe of Jamestown, and Paul J. Carr, III of Lebanon; and numerous great grandchildren. In addition to her parents and her husband, Doris was preceded in death by her siblings. Private Family Graveside Services will be held on Monday, April 27, 2020 at Salem Cemetery in Zionsville, Indiana. Myers Mortuary in Lebanon has been entrusted with her burial arrangements. Memorials are suggested to the charity of the donor’s choice.

The family of Doris Marie Carr created this Life Tributes page to make it easy to share your memories.

Send flowers to the Carr family.