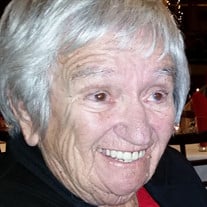 Doris A Gebbia, 86, died peacefully after a long, full life. Doris was a devout Catholic, who believed in family and community. The only child of an Army band leader, she was born in Brooklyn, New York and raised in many cities around the country, by her parents Juan and Margaret (Knight) Melendez. After graduating from St. Stephen’s High School in Bradshaw, Maryland at the age of 16, she went to work as a clerk in the finance center at the Army Chemical Center at Edgewood Arsenal in Maryland, where she met her husband of 65 years, Steve. After the war, they married and moved to Chicago, where Steve started his long career in the steel forging industry, and Doris started her long career as a mother and homemaker. Doris and Steve married in April 1955 and soon after, started their large family of 8 children, 16 grandchildren, and 6 great-grandchildren. Doris’s loving family includes Vicki; Frederic (Joan) and their son Nick; Karen and her children Ben, Rafaella and Luca; the late Stephen L Gebbia who passed away in October 2019; Doris (John) and their sons Kyle, Tom (Ashley), and Dan; Mary (Ozzie) and their children Kate (Keith), Keli (Marc) and their sons Taro and Mark, Carrie and her children Sydney and Emery, Matt (Stephanie) and their sons Yasuaki and Tadashi, and Samantha; Paul (Erica) and their daughters Atalie and Havah; and Charles (Debbie) and his children Anthony and Veronica. She was preceded in death by her husband Steve and their son Steve. After Steve retired, he and Doris moved to Lebanon, Indiana, where they lived, and made numerous friends, for more than 20 years. Doris was very involved in church and community organizations, including St. Vincent de Paul and Boone County Senior Services Senior Olympics. She loved to golf and was a member of the women’s league at Cool Lake Golf Course. She was very proud to have earned an associate’s degree in Liberal Arts from Ivy Tech Community College at the age of 76, as were her children and husband. The courses enabled her to help tutor ESL, which was very important to her. Visitation will be held from 11:30 a.m. to 1:00 p.m. on Saturday, January 22, 2022 at Myers Mortuary, 1502 North Lebanon Street, in Lebanon, Indiana. The Funeral Mass will follow on Saturday at 1:30 p.m. at St. Joseph Roman Catholic Church, 319 East South Street, in Lebanon, Indiana. The family kindly asks for attendees to follow the CDC guidelines, please wear masks and social distance. Interment will follow at St. Joseph Cemetery in Lebanon. Memorials may be made in Doris’s memory to St. Vincent de Paul or Boone County Senior Services.

Doris A Gebbia, 86, died peacefully after a long, full life. Doris was a devout Catholic, who believed in family and community. The only child of an Army band leader, she was born in Brooklyn, New York and raised in many cities around the country,... View Obituary & Service Information

The family of Doris A. Gebbia created this Life Tributes page to make it easy to share your memories.

Doris A Gebbia, 86, died peacefully after a long, full life.

Send flowers to the Gebbia family.