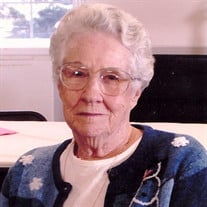 Mrs. Edna May Cunningham, 102, passed away peacefully surrounded by her loving family on December 23, 2021 at the family farm in Lebanon. She was born in Boone County, Indiana on January 29, 1919; a daughter of the late John J. and Louora (Davis) Batts. She was a 1937 graduate of Pinnell High School and a graduate of Indiana Business College. On January 27, 1939, in Clermont, Indiana, she was married to Lewis Maurice “Jake” Cunningham; he passed away on October 16, 2007. Edna was loving, kind and deeply devoted to her family. She was a faithful member of Milledgeville United Methodist Church, where she served as a youth leader for many years. She was blessed to live on the family farm and enjoyed flower gardening, singing hymns, sewing, canning and cooking, but nothing brought her more joy than her children, grandchildren and great grandchildren. Survivors include one son, Jerrell A. “Jerry” (Pamela) Cunningham of Lebanon; one daughter, Charlotte (Tom) Hadley of Columbus, Indiana; seven grandchildren, Shelley (Mark) Stergar of Brownsburg, Daniel (Melanie) Cunningham of Trafalgar, Indiana, Sheryl (Dan) Wilhoite of Shelbyville, Indiana, Tanya (Keith) Lunsford of Madison, Indiana, Amy (James) Carlat of Ames, Iowa, Anika Cunningham of Jersey City, New Jersey, Jerrell “Moe” Cunningham of Lebanon; two step grandchildren, Earl Isham of Lebanon, Joe Isham of Lebanon; many great grandchildren; sister-in-law, Eleanor Batts of Estero, Florida; numerous nieces and nephews. In addition to her parents and husband, Edna May was preceded in death by a son, Donald M. “Don” Cunningham; sister, Evelyn Lee; brothers, Richard, Frank, and Jay Batts. Funeral Services are to be held at 2:00 p.m. on Thursday, December 30, 2021 at Myers Mortuary, 1502 North Lebanon Street, Lebanon, Indiana. Visitation will be held from 12:00 p.m. to 2:00 p.m. on December 30th at the funeral home in Lebanon. She will be laid to rest beside her husband and son at Old Union Cemetery in Boone County, Indiana. Memorials may be given to the charity of the donor’s choice or WAM.

Mrs. Edna May Cunningham, 102, passed away peacefully surrounded by her loving family on December 23, 2021 at the family farm in Lebanon. She was born in Boone County, Indiana on January 29, 1919; a daughter of the late John J. and Louora (Davis)... View Obituary & Service Information

The family of Edna May Cunningham created this Life Tributes page to make it easy to share your memories.

Send flowers to the Cunningham family.