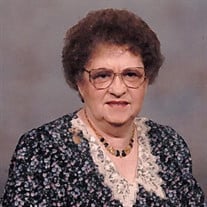 Mrs. Elsie C. Bevington, 96, passed away on March 18, 2021 at Signature Healthcare at Parkwood in Lebanon. She was born on November 20, 1924 in Jennings County, Indiana; a daughter of the late Samuel David and Mary Catherine (Price) Eberwein. She was a 1944 graduate of Whitestown High School. On December 27, 1944 she was married to Mervin C. Bevington and he passed away on November 6, 2008. Elsie rarely missed a day of work at Shumates in Lebanon, where she retired from as a production clerk. She was longtime member of Walnut Street Baptist Church. Later she was a faithful member of Grace Baptist Church where she was very active in the Awana’s club. In addition to loving her family she enjoyed bowling and loved being in the “Red Hat” society, in which red happened to be her favorite color. Survivors include: one daughter, Debra (Vince) Morrow of Lebanon; six grandchildren, Michael (Julie) Morrow of Lebanon, Ohio, Dustin (Amber) Morrow of Middletown, Ohio, Rachelle (Brad) Bevington-Fritz of Lebanon, Colt Barrickman of Lebanon, Curt Barrickman of Lebanon, Carson Barrickman of Lebanon; seven great grandchildren; two great-great grandchildren; brother, Jesse Eberwein of Ormond Beach, Florida; son-in-law, Gary Barrickman of Lebanon; daughter-in-law, Trish Bevington of Daytona, Florida. In addition to her parents and husband, Elsie was preceded in death by a son, Jerry W. Bevington and daughter, Janet Barrickman; brothers, David, Andrew, Vernon, Raymond and Leonard; sisters, Josephine Wright, Olive Hawkins and Mabel Cox. Visitation will be held from 10:00 to 11:00 a.m. on Saturday, March 27, 2021 at Myers Mortuary, 1502 North Lebanon Street in Lebanon. Interment will follow visitation on Saturday, March 27 at Pleasant View Cemetery, State Road 32 in Lebanon, Indiana. Memorials may be made to the Alzheimer’s Association Greater Indiana Chapter, 50 East 91st Street, Suite 100, Indianapolis, Indiana 46240-1554.

Mrs. Elsie C. Bevington, 96, passed away on March 18, 2021 at Signature Healthcare at Parkwood in Lebanon. She was born on November 20, 1924 in Jennings County, Indiana; a daughter of the late Samuel David and Mary Catherine (Price) Eberwein. She... View Obituary & Service Information

The family of Elsie C. Bevington created this Life Tributes page to make it easy to share your memories.

Send flowers to the Bevington family.