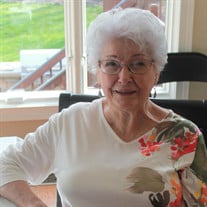 Esther Ruth Pratt, 87, formerly of Lebanon, passed away peacefully on March 31, 2022. Esther graced the world on November 15, 1934 in Darlington, IN to Frank and Pauline (Long) McDaniel, she was one of nine children. She was a home healthcare worker, homemaker, and loving mother, grandmother and sibling. She was an active member of the Lebanon Christian Church. Esther was the kind of woman you could always count on for a heartfelt hug, good conversation and a warm meal when visiting. She enjoyed dancing at the senior center in Danville, gardening, bird watching, reading, watching old John Wayne movies, and welcoming spring each year. Spring will not be as vibrant this year with her gone, but we know she is in a better place dancing while the birds sing. We will miss you, Esther Pratt. Survivors include her grandchildren: Ashley Van Den Kerkhof and husband, Kevin Van Den Kerkhof of Carlsbad, California and Alaina (Ali) Robison and husband, Dr. Jon Robison of Leo, Indiana; sister, Frances Norton of Lebanon; Great-Grandchildren: Kaitlin and Seth Jones, Alex, Lucas and Landon Robison, and Grayson and Ashton Van Den Kerkhof; and daughter-in-law, Kandi Pratt. She was preceded in death by her parents and siblings: Jim McDaniel, Robert McDaniel, Jack McDaniel, Joe McDaniel, Margarete May, Virginia Parks and Juanita Wildermuth; her children Donna Vandivier and Joe Pratt; and granddaughter, Tracey Jones. A funeral service will be held at 3:00 p.m. on Saturday, April 9, 2022 at Myers Mortuary, 1502 North Lebanon Street in Lebanon, Indiana. Friends may visit from 1:00 p.m. until the time of the service at the funeral home. Burial will follow at the IOOF Cemetery in Darlington. Online condolences: www.myersmortuary.com

Esther Ruth Pratt, 87, formerly of Lebanon, passed away peacefully on March 31, 2022. Esther graced the world on November 15, 1934 in Darlington, IN to Frank and Pauline (Long) McDaniel, she was one of nine children. She was a home healthcare... View Obituary & Service Information

The family of Esther Ruth Pratt created this Life Tributes page to make it easy to share your memories.

Send flowers to the Pratt family.