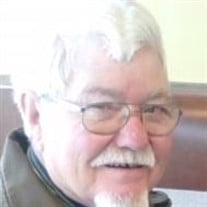 Eullis “Ooggie” Holt, 87, passed away at Witham Memorial Hospital in Lebanon, Indiana, on March 3, 2019. He was born on March 30, 1931 in Corbin, Kentucky a son of the late Amos and Dora Alice (Littreal) Holt. He was married on May 7, 1955 in Lebanon to Okie Mae (Curtis) Holt, they enjoyed 63 years together and she survives. Ooggie was employed as a Tool and Die Maker at Carrier Corporation in Indianapolis; retiring after 30 years of dedicated service. He leaves behind his wife, Okie; daughter, Debbie Ottinger and husband, Ralph Burroughs of Lebanon, son, Michael Holt of Lebanon; grandchildren, Ryan Ottinger, Ashley (Jeff) Nelson, Lindsey (Jake) Jones, Austin (Shelly) Holt; great-grandchildren, Kobe, Kylie, Bryce, Mya, Ryker and Mackenzie. In addition to his parents, Ooggie was preceded in death by brothers, Jewell Holt, Amos Henry Holt, Jr., Gerald “Cracker” Holt, and Ray Simon Holt; and two sisters, Lois Kemmerling and Lorene Posey. Ooggie enjoyed the great outdoors, fishing, hunting, competitive rabbit hunting and coffee at Hardee’s. He was a friend to many, a stranger to no one and will be greatly missed. Most of all, his greatest joy was his grandchildren and great grandchildren. Funeral Services are planned for Saturday, March 9, 2019, at 1:00 p.m. at Myers Mortuary, 1502 North Lebanon Street, in Lebanon, Indiana. Visitation will be held on Saturday from 10:00 a.m. until the time of the service at the funeral home in Lebanon. Interment will follow services at Oak Hill Cemetery in Lebanon. Memorials may be made in his memory to the American Lung Association, 115 West Washington Street. Suite #1180-South, Indianapolis, Indiana 46204 or the Humane Society for Boone County, P. O. Box 708, Lebanon, Indiana 46052.

The family of Eullis O. Holt created this Life Tributes page to make it easy to share your memories.

Send flowers to the Holt family.