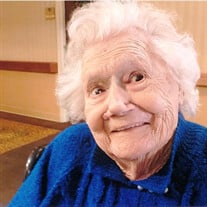 Fannie Bell Wright, 97, of Zionsville, Indiana, passed away Sunday, August 2, 2020 at Homewood Health Campus in Lebanon, Indiana. She was born March 30, 1923 in Indianapolis, a daughter of the late Fred and Florence (Lemon) Isenhower Raised in Boone County, Indiana, Fannie was a graduate of Whitestown High School. On March 28, 1943, she was married to Emsley D. Wright in Marion County, Indiana. He preceded her in death on August 15, 1990. Fannie helped her husband on the farm and also worked as a Production Clerk for Eli Lilly. She served as a Junior Leader for Boone County 4-H for many years. An avid gardener and a talented seamstress, Fannie enjoyed life on the farm. She was a devoted and loving wife, mother, and grandmother. Survivors include two children, Nancy A. Zeller of Lebanon and Emsley D. “Bud” Wright, II and wife, Darla of Zionsville; three grandchildren, Melissa Duff and husband, Ryan of Lebanon, Emsley D. “Rocky” Wright, III and wife, Casey of Lebanon, and Robert M. Wright and wife, Karlie of Zionsville; and two great grandsons, Nathan and Aaryn. In addition to her parents and her husband, Fannie was preceded in death by her brother, David Isenhower and her sister and brother-in-law, Ella and John Myers. Private Family Graveside Services were held at Crown Hill Cemetery in Indianapolis. Myers Mortuary of Lebanon was entrusted with her burial arrangements.

The family of Fannie B. Wright created this Life Tributes page to make it easy to share your memories.

Send flowers to the Wright family.