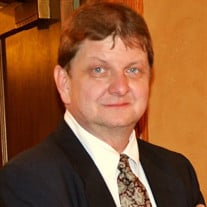 Frank Malcom Starkey, 53, passed away Saturday, November 9, 2019 at his home in Lebanon, Indiana. Born in Lebanon on January 14, 1966, he was the son of the late Don Richard and Martha Ruth (Endres) Starkey. A life-resident of Boone County, Frank graduated from Lebanon High School in 1984. He was a 1988 graduate from Indiana State University and 1994 graduate from IU School of Law in Indianapolis. He worked for RCI in Indianapolis from 1988-2012 and was a proud owner of his practice, Frank M. Starkey, Attorney at Law in Lebanon for over 25 years. Frank grew up in the St. Joseph Roman Catholic Church in Lebanon. He was a member of the Boone County Bar Association, Boone County Conservation Club and Lambda Chi Alpha Fraternity. Boone County history was his passion. He had a keen interest in tracing family roots through genealogy. He enjoyed discussing economics and current events. In addition, Frank enjoyed photography, architecture, music and art. He loved his family and will be missed by all who knew him. Survivors include his sisters, Janet M. Petsch and companion, Dennis Wall of Lebanon and Joyce S. Cunningham and husband, Jim of Whitestown; nieces and nephews, Don (Erinn) Petsch, Jennifer (Brian) Kidder and Jim (Jillian) Cunningham; and great nieces and great nephew, Cailey Petsch, Brianna E. Hamblen, and Jimmy Cunningham. Visitation will be held on Friday, November 15, 2019 from 4:00 to 8:00 p.m., at Myers Mortuary, 1502 North Lebanon Street, in Lebanon, Indiana. Funeral Services are planned for 11:00 a.m. on Saturday, November 16, 2019 at the funeral home in Lebanon with Fr. Richard Weisenberger, officiating. Interment will follow services at Oak Hill Cemetery in Lebanon. Memorials may be made in Frank’s memory to the charity of the donor’s choice.

Frank Malcom Starkey, 53, passed away Saturday, November 9, 2019 at his home in Lebanon, Indiana. Born in Lebanon on January 14, 1966, he was the son of the late Don Richard and Martha Ruth (Endres) Starkey. A life-resident of Boone County,... View Obituary & Service Information

The family of Frank M. Starkey created this Life Tributes page to make it easy to share your memories.

Send flowers to the Starkey family.