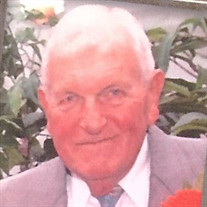 Rev. Frederick Howard Tanselle departed this life and went home to be with his Lord and Savior on Wednesday, July 7, 2021. He was 92 years old. Fred was born May 11, 1929 in Lebanon, Indiana; a son of the late Howard Knotley and Carolyn Lavina (Stephenson) Tanselle. He was a 1948 graduate of Lebanon High School and had attended one semester at DePauw University before serving his country honorably in the United States Army from 1951–1952. Following his military service, Fred graduated from Moody Bible Institute of Chicago. On June 5, 1955, he was united in marriage to Barbara Ann (Hedge) Tanselle. They had shared 66 loving years together. A man of strong faith, the Reverend Fred Tanselle was ordained in 1972 at the First Baptist Church in Rensselaer, Indiana. His faith and devotion led him to serve numerous churches in Indiana. During his 30 years in ministry, Fred also was employed with Pittman-Moore, now called Dow Chemical Company, for 17 years as a lab technician. Fred retired from ministry in 1994 and the following year he and Barbara returned to their hometown of Lebanon. He continued to serve the community by greeting the public during visitations and funerals at Myers Mortuary. The Rev. Tanselle presided over many funerals as well over the years. He was compassionate, loving, and deeply cared for his family and parishioners. Fred had a love for music and enjoyed singing tenor with the Harmony Hustlers Barber Shop Quartet. In addition, he had directed church choirs and sang at many weddings and funerals. He leaves behind his loving wife, Barbara, of Lebanon; three children, Douglas (Robin) Tanselle of Titusville, Florida, Christopher (Robin) Tanselle of Sheridan, Lori (Jon) Cox of Greenwood; eleven grandchildren, Todd, Aimee, Jarett Tanselle of Titusville, FL, Tim (Ashley) Tanselle of Kirklin, Lisa (Adam) Irwin of Noblesville, Charles (Julie) Tanselle of Noblesville, Sarah (Cameron) Lambert of Lebanon, Jon (Betsey) Cox, II of Greenwood, Joel (Taylor) Cox of Greenwood, Joy (Sean) Stafford of Murfreesboro, TN, Jordan Cox of Greenwood and thirteen great grandchildren. In addition to his parents, Fred was preceded in death by his sister and brother-in-law, Barbara and Steve Huckleberry. Funeral Services are planned for 2:00 p.m. on Monday, July 12, 2021, at Myers Mortuary, 1502 North Lebanon Street, Lebanon, Indiana. Visitation will be held from 12:00 noon until the time of the service. Interment with Military Rites will follow at Oak Hill Cemetery in Lebanon. Memorial contributions may be directed to Lighthouse Baptist Church, 858 West 250 North, Lebanon, Indiana 46052 or to Boone County Senior Services, 515 CrownPointe Drive, Lebanon, Indiana 46052.

Rev. Frederick Howard Tanselle departed this life and went home to be with his Lord and Savior on Wednesday, July 7, 2021. He was 92 years old. Fred was born May 11, 1929 in Lebanon, Indiana; a son of the late Howard Knotley and Carolyn Lavina... View Obituary & Service Information

The family of Rev. Frederick H. Tanselle created this Life Tributes page to make it easy to share your memories.

Send flowers to the Tanselle family.