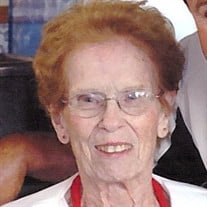 Mrs. Frieda Letitia Cavin Ross, 97, passed away on February 19, 2020 at Clinton House in Frankfort, Indiana. She was born on July 21, 1922 in Boone County, Indiana; a daughter of the late Otho Lindley and Lenora Evelyn (Kincaid) Wiles. She attended Kirklin High School and was a life resident of Boone County until moving to Frankfort in 1993. On March 8, 1943 she was married to Henry Franklin Cavin in Boone County; he passed away on February 14, 1990. She was later married to Charlie R. Ross on July 25, 1993 and he preceded her in death on June 24, 2008. Frieda worked at Winkler’s during WWII and Stewart Warner during the Vietnam Era. Later in life, she worked a few years at Hoosier Village and Pitman-Moore in Zionsville. A talented pianist, she played for sixty years at Fairview Church in Lebanon. She enjoyed quilting, gardening, flowers, bird watching (especially Finches), and loved caring for her Boston Terriers and tropical fish. She was a devoted wife and mother. Her grandchildren and great grandchildren were her pride and joy. Survivors include: One Son: C. Dean (Tina) Cavin of Kirklin, Indiana One Daughter: Shirley E. (Bob) Milton of Frankfort, Indiana Seven Grandchildren: Jeff Hoffman Randy Hoffman Jerry Cavin Amy Corbin Letitia Mendoza Sigrid Martin Julie West Six Great Grandchildren One Great-Great Grandchild Sister: Nina Edith Trietsch of Arcadia, Indiana In addition to her parents and husbands, Frieda was preceded in death by a brother, Lester A. Wiles, Sr. Funeral Services will be held at 1:00 p.m. on Saturday, February 22, 2020, at Myers Mortuary, 1502 North Lebanon Street, in Lebanon, Indiana. Visitation is planned from 11:00 a.m. until the time of service on Saturday at the funeral home in Lebanon. Interment will follow services at Oak Hill Cemetery in Lebanon. In lieu of flowers, the family requests memorials may be made to the Muscular Dystrophy Association, 8777 Purdue Road, Suite 235, Indianapolis, Indiana 46268.

Mrs. Frieda Letitia Cavin Ross, 97, passed away on February 19, 2020 at Clinton House in Frankfort, Indiana. She was born on July 21, 1922 in Boone County, Indiana; a daughter of the late Otho Lindley and Lenora Evelyn (Kincaid) Wiles. She... View Obituary & Service Information

The family of Frieda L. Cavin Ross created this Life Tributes page to make it easy to share your memories.