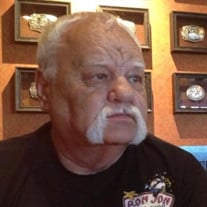 Edward Eugene “Gene” Watson, 75, of Lebanon, Indiana, passed away Tuesday, June 30, 2020, at St. Vincent Hospice in Indianapolis. He was born December 9, 1944 in Boone County, Indiana, a son of the late Homer and Helen M. (Barnhart) Watson. He was a life-resident of Boone County and a 1962 graduate of Dover High School. Gene served the town of Lebanon as a police officer, retiring after many years. He also worked at Co-Op in the Anhydrous Plant in Boone County for a period of time. In addition, during race time, he was a yellow shirt for the Indianapolis 500. He was a wonderful father and grandfather. Gene was active in Boone County 4-H. He and his wife enjoyed doing needlepoint work. Boone County residents could see their fine detailed work in the center of the Bicentennial quilt that once hung in the middle of the courthouse. They also enjoyed shelling off the Atlantic Coast of Florida together. Survivors include: Two Children: Robert Watson of Avon Melanie Watson of Lebanon Grandson: Hans Riegner of Indianapolis Brother: David (Beverly) Watson of Lebanon Four Sisters: Ida Marie Vanausdall of Lebanon Joan (Don) Finnegan of Lafayette Theda Watson of Lebanon Juanita (Robert) Campbell of Wanamaker Many Nieces and Nephews In addition to his parents, Gene was preceded in death by a son, Edward Christopher “Chris” Watson; two brothers, Leonard Franklin Watson, Sr. and Leroy Watson; and recently Teresa Watson. Visitation will be held from 4:00 to 8:00 p.m. on Wednesday, July 8, 2020, at Myers Mortuary, 1502 North Lebanon Street, in Lebanon, Indiana. No Funeral Services are planned.Boone County Crematory has been entrusted with his cremation arrangements following visitation.

The family of Gene Watson created this Life Tributes page to make it easy to share your memories.

Send flowers to the Watson family.