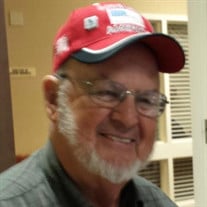 Mr. George R. Benge, 85, longtime resident of Jamestown, Indiana, passed away on Thursday, February 3, 2022, at Witham Memorial Hospital in Lebanon. He was born September 17, 1936, in Boone County, Indiana, a son of the late Albert and Ruth Martha (Barnard) Benge. On October 15, 1955, he was married to Louise (Hedge) Benge in Lebanon, Indiana; she survives. Raised in Boone County, George attended schools in Jamestown. He was a truck driver all of his working career, retiring from Fox Contractors. George was a faithful member of the Jamestown Christian Church where he served as elder and deacon. He was delighted to have been awarded the Elder Emeritus Honor. He served as Senior High Sunday School teacher and enjoyed leading the youth in church activities for many years. In addition, he was a member of the Indy 500 Chapter Model T Ford Club of America. George was a devoted husband, father, grandfather, and great grandfather who loved his family dearly. Survivors include his wife, Louise Benge; three children, David M. Benge of Lebanon, Daniel L. Benge of Lebanon, and Teresa (Gregory) Steelsmith of Lebanon; six grandchildren; five great grandchildren; a brother, Samuel Benge of Freedom, Indiana; a sister, Nancy Stone of Indianapolis; and many nieces and nephews. In addition to his parents, George was preceded in death by a son, Douglas R. Benge; a daughter-in-law, Terry Lynn Benge; a grandson, Chad Benge; and two brothers and three sisters. Funeral Services are planned for 2:00 p.m. on Tuesday, February 8, 2022, at the Jamestown Christian Church, 900 North Lebanon Street, in Jamestown. Visitation will be held from 11:00 a.m. until the time of services at the church. Interment will follow services at I.O.O.F. Cemetery in Jamestown. Porter and Hunt Funeral Home & Crematory in Jamestown has been entrusted with his arrangements. Memorials may be directed in his memory to the Jamestown Christian Church, P.O. Box 147, Jamestown, Indiana 46147.

Mr. George R. Benge, 85, longtime resident of Jamestown, Indiana, passed away on Thursday, February 3, 2022, at Witham Memorial Hospital in Lebanon. He was born September 17, 1936, in Boone County, Indiana, a son of the late Albert and Ruth... View Obituary & Service Information

The family of George R. Benge created this Life Tributes page to make it easy to share your memories.

Send flowers to the Benge family.