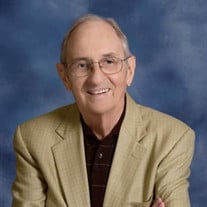 George DuBois Donaldson, 90, passed away on Wednesday, January 23, 2019, at his home in Lebanon, Indiana, surrounded by his loving family and pastor. He was born in Lebanon on December 27, 1928, the third son of the late Fred Raymond and Esther Anne (Coombs) Donaldson. George was a life-long resident of Lebanon. He graduated from Lebanon High School in 1946. He attended DePauw University in Greencastle, Indiana where he was a member of the Beta Theta Pi fraternity and graduated with a Bachelor of Arts degree in 1950. He served in the United States Army from 1951 to 1953 where he did an 18-month tour on the battlefields of Korea during the Korean War earning the rank of Sergeant. George married the love of his live, Margaret “Peg” (Ping) Donaldson, on September 13, 1953. They enjoyed over 40 years of marriage before Peg passed away on May 2, 1994. George managed the Pinnell-Coombs Lumber Yard in Lebanon from 1955 until 1966 when he and Peg purchased a small local chocolate business from Charles and Eva Callane. In addition, George worked as an officer at Union Federal Savings & Loan and later at Citizens Bank, both in Lebanon, while he and Peg grew the business that became known as Donaldson’s Finer Chocolates. Donaldson’s Finer Chocolates became a household name in central Indiana and has sold chocolates all over the world. The business has earned numerous awards, including: Retail Confectioners International (RCI) Best of Show-2007, Best Business in Boone County – 2014, Indy-A-List #1 Best Chocolates, and Indy Chocolate Fest 2015-Judge’s Favorite. George’s oldest son, Bob joined the business in 2010, and his wife Kathy soon followed in 2013, and it continues to thrive to this day. In addition to the company awards, George received numerous individual awards and recognitions. In 2006 as a part of the 40th anniversary of Donaldson’s Chocolates, then Mayor Jim Acton declared October 28 as “George Donaldson Appreciation Day” and awarded him a key to the City. In 2008 George was named Boone County Business Person of the Year. In 2016 as a part of the 50th anniversary of Donaldson’s Chocolates, George received the prestigious Distinguished Hoosier Award signed by then Governor Mike Pence and awarded to George by then Lieutenant Governor Eric Holcomb in a ceremony at the Indiana Statehouse. That same year George received his second key to the City of Lebanon from Mayor Matt Gentry at a special City Council meeting presentation. As a devoted husband, father, grandfather and great-grandfather, George loved his family, and their activities. George was very active in the community and belonged to many organizations. He was a member of Ulen Country Club, Oak Hill Cemetery Board, VFW Post #910 Lebanon, and Rotary Club of Lebanon. Perhaps most of all, George was a man of faith and a devoted follower of Jesus Christ. He served multiple times as an elder on the Session of First Presbyterian Church in Lebanon. He was a strong supporter of the Presbyterian Preschool Ministry where he also served on its Board. He supported the Billy Graham Evangelistic Association in many ways including serving as a volunteer when crusades were held in Indiana. George is survived by his three loving sons, G. Robert “Bob” Donaldson (Kathy), William R. “Bill” Donaldson (Cathy), and Bruce D. Donaldson (Robon). Also surviving are grandchildren Megan (Frank) Thompson, Amy (Jon) Riley, Joe (Laura) Donaldson, Ben (Kelly) Donaldson, Austin Fry and Grant Fry, and sister-in-law Sara Donaldson. He leaves 10 great-grandchildren who affectionately called him “Great Grandpa Chocolate.” In addition to his parents and wife, George was preceded in death by two brothers, Dr. Frank C. Donaldson and John W. Donaldson. Visitation will be held from 2:00 to 6:00 p.m. on Sunday, January 27, 2019 at Myers Mortuary, 1502 North Lebanon Street, in Lebanon, Indiana. Funeral Services are planned for 11:00 a.m. on Monday, January 28, 2019 with visitation one hour prior at the First Presbyterian Church, 128 East Main, Lebanon, Indiana with Rev. Terri Thorn officiating. Entombment with military rites will follow services at Oak Hill Cemetery in Lebanon, Indiana. Memorials may be made in George’s honor to the Presbyterian Preschool Ministry, 128 E Main Street, Lebanon, IN 46052.

George DuBois Donaldson, 90, passed away on Wednesday, January 23, 2019, at his home in Lebanon, Indiana, surrounded by his loving family and pastor. He was born in Lebanon on December 27, 1928, the third son of the late Fred Raymond and Esther... View Obituary & Service Information

The family of George DuBois Donaldson created this Life Tributes page to make it easy to share your memories.

Send flowers to the Donaldson family.