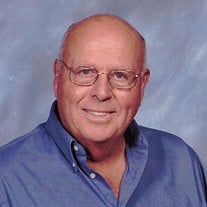 George Richard Hine, 86, of Whitestown, Indiana, passed away on Wednesday, October 9, 2019, at the Richard L. Roudebush VA Medical Center in Indianapolis. He was born on May 29, 1933 in Boone County, Indiana, a son of the late Martin Haitt and Marabelle (Anderson) Hine. Raised in Boone County, he graduated in 1952 from Whitestown High School. Following school, he served his country honorably in the United States Marine Corp. On April 21, 1952, he was married to Barbara Jane (Kesler) Hine in Whitetown. She preceded him in death in April 1980. George farmed his entire life. He was a member of New Hope Christian Church and the American Legion, both of Whitestown, and served as a Boone County 4-H Leader for many years. He enjoyed his Bible study group, playing cards on Thursdays, or just relaxing on his porch. George had a passion for fishing, camping, and collecting tractors, both working and toy. He was a man with a big heart and a very loving and dedicated husband, father, and grandfather. Survivors include: Five Children: Richard W. (Regina) Hine of Greenwood Diana L. Batz of Indianapolis Robert D. (Tricia) Hine of Williamsport, Pennsylvania Dawn E. Hine of Whitestown Donita J. Coleman of Indianapolis Thirteen Grandchildren, Thirteen Great Grandchildren, and One Great Great Grandchild Four Legged Friend: NayNay In addition to his parents and his wife, George was preceded in death by a daughter, Deborah A. Hine; two infant twin granddaughters, Brandi and Shelby Coleman; his brother, Kenneth Hine; and sister, Margie Smith. Visitation is planned from 4:00 to 8:00 p.m., Friday, October 11, 2019, at Myers Mortuary, 1502 North Lebanon Street in Lebanon. Funeral Services will be held at 1:30 p.m. on Saturday, October 12, 2019, at the funeral home in Lebanon. Interment with military rites will follow services at Oak Hill Cemetery in Lebanon. Memorials may be directed to the Boone County 4-H Clubs, 1300 East 100 South Lebanon, Indiana 46052 or to the American Cancer Society, Central Indiana Office, 5635 West 96th Street, Suite 100, Indianapolis, Indiana 46278.

George Richard Hine, 86, of Whitestown, Indiana, passed away on Wednesday, October 9, 2019, at the Richard L. Roudebush VA Medical Center in Indianapolis. He was born on May 29, 1933 in Boone County, Indiana, a son of the late Martin Haitt... View Obituary & Service Information

The family of George R. Hine created this Life Tributes page to make it easy to share your memories.

Send flowers to the Hine family.