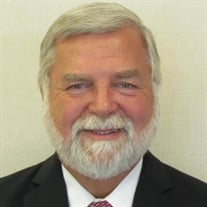 It is with heavy hearts and great sadness that we announce the death of our beloved husband, father, and grandfather, Harry Frank Garman of Brownsburg, Indiana. Harry joined his loved ones in Heaven surrounded by family on January 28, 2021 at St. Vincent Hospital in Carmel, Indiana, following complications with Covid-19. He was 72. Harry was born in Akron, Ohio, in 1948, to Julius and Clara Ethel (LeMaster) Garman. He was raised in Akron and graduated from Hower High School in 1967. Harry was proud to serve in the United States Army from 1968–1971 as a Criminal Investigator in Baumholder Germany. Upon his return to Akron, Harry worked in the autobody field. In the late 1970s, he joined his friend, Gary Bologna to form Garman/Bologna Insurance Agency. With Harry’s professional skills and his art of training others the agency thrived. Harry moved to Indianapolis in the early 1980s where he excelled as Vice President of Sales for Society National Life Insurance Company. On April 9, 1988, he married Lori S. (Oakley) Garman in Lebanon, Indiana. In December 1988, they started their own business, Midwest Insurance Marketers of America. Harry was dedicated to the life and health insurance industry, his business and his agents. He was the ultimate sales professional. Harry was a member of the National Association of Health Underwriters, Indiana Association of Health Underwriters where he served as President from 1996–1997, and Indianapolis Association of Health Underwriters where he served as President from 1993–1994. Harry was a devoted family man. His passion for fishing inspired the annual Bal/Garm fishing competition at Lake Okeechobee with his son, brother-in-law, and nephew. He also loved fishing at his daughter and son-in-law’s pond. He and Lori also enjoyed vacationing at their condo in Florida and giving Lady Luck a chance at the Casino and the dog races. He loved his pups, Rubie, Lola, and Stella; his grand-pups and grand-kids (goats). Survivors include his beloved wife, Lori; son, Jacob (Olivia) Garman; daughter, Melanie (Donald) Orpen; grandson, Brayden Schaefer; his father, Julius Garman, brothers, Paul (Cindy) Garman and Ron (Carol) Garman; sisters-in-law, Naomi (Doug) McCracken and Stacey (Nick) Baldwin; three nephews; seven nieces; three great nephews; and four great nieces. Harry was preceded in death by a son, Daniel Adam Garman; his mother, Clara Garman; his aunt, Katherine LeMaster; and his in-laws, Harold Oakley and Lollie Oakley French. The world may seem a little dimmer, but his light will shine in our hearts forever. Visitation is planned from 4:00 to 8:00 p.m. on Thursday, February 4, 2021 at Myers Mortuary, 1502 North Lebanon Street, in Lebanon, Indiana. Visitors are asked to follow the CDC guidelines, please wear a mask and social distance. Funeral Services will be held at 11:00 a.m. on Friday, February 5, 2021 at the funeral home in Lebanon. For those not in attendance, services may be viewed on the Myers Mortuary Facebook page beginning at 11:00 a.m. Interment with military rites will follow services at Oak Hill Cemetery in Lebanon. Memorials may be directed to the Sunshine Social Club, P.O. Box 199, Whitestown, Indiana 46075 or to the American Diabetes Association, 8604 Allisonville Road, Suite 140, Indianapolis, Indiana 46250.

It is with heavy hearts and great sadness that we announce the death of our beloved husband, father, and grandfather, Harry Frank Garman of Brownsburg, Indiana. Harry joined his loved ones in Heaven surrounded by family on January 28, 2021... View Obituary & Service Information

The family of Harry F. Garman created this Life Tributes page to make it easy to share your memories.

It is with heavy hearts and great sadness that we announce the...

Send flowers to the Garman family.