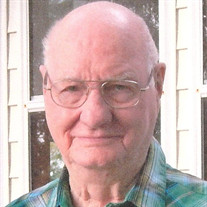 Harry B. “Bing” Stum, 87, of rural Lebanon, Indiana, passed away on Thursday, November 28, 2019, at Witham Memorial Hospital. He was born in Putnam County, Indiana, a son of Jason and Eddyth (Leap) Stum. On December 5, 1958, he was married to Margaret Ann Stum in Whitestown, Indiana. They would have celebrated their 61st wedding anniversary next week. Bing graduated from Whitestown High School in 1950. He served his country honorably from 1950 to 1954 in the United States Air Force as an aircraft mechanic. Some of the Accur Jets Pilots – forerunners of the Thunderbirds – flew his planes. Following his military service, he went back to work for Allison’s, building aircraft engines; retiring in 1980. Bing also worked as a part-time farmer. He was a wonderful husband and father. He will be deeply missed by his wife, Ann; his daughter, Brenda Stum; and his fur babies, Tucker and Miss Kay. In addition to his parents, Bing was preceded in death by a daughter, Linda S. Stum, and brother, John Stum. Funeral Services are planned for 3:00 p.m., on Wednesday, December 4, 2019, at Myers Mortuary, 1502 North Lebanon Street, in Lebanon, with Pastor Gina Kirkland, officiating. Visitation will be held from 1:00 p.m. until the time of service at the funeral home in Lebanon. Interment will follow services at Zionsville Cemetery in Zionsville. Memorials may be made in his memory to the Humane Society for Boone County, P.O. Box 708, Lebanon, Indiana 46052 or to the Salem United Methodist Church, 6701 South 775 East, Zionsville, Indiana 46077.

The family of Harry "Bing" Stum created this Life Tributes page to make it easy to share your memories.

Send flowers to the Stum family.