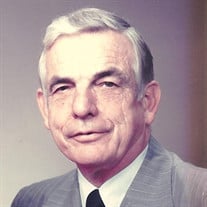 Mr. Herbert LeRoy Searles, 88, passed away Friday, March 13, 2020, at Homewood Health Campus in Lebanon, Indiana. He was born in Huntington County, Indiana, on May 14, 1931, a son of the late Alva Lee and Mildred Elizabeth (Buzzard) Searles. He... View Obituary & Service Information

The family of Herbert L. "Herb" Searles created this Life Tributes page to make it easy to share your memories.

Send flowers to the Searles family.