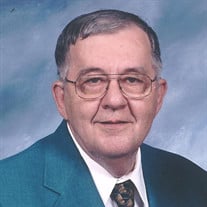 Jack Dean Crawford, 86, passed away on Friday, March 18, 2022, at his home in Brownsburg, Indiana. He was born in Zanesville, Ohio on June 14, 1935; a son of the late William Herbert and Wilma (Bogan) Crawford. On May 29, 1955, he was united in marriage to Janice Lee (Cannavan) Crawford in Indianapolis. They had shared 65 loving years together before she passed away on July 15, 2020. Jack was a graduate of Kirklin High School and served his country honorably in the Indiana National Guard. He was a service technician for Indiana Bell Telephone Company for thirty-two years. Jack was a member of Parkside Bible Church in Brownsburg. In his spare time, he enjoyed fishing, gardening, crocheting, listening to music and reading his Bible. He was a kind man who was devoted to his family and will be greatly missed by all who knew him. He leaves behind his three sons, Gary D. (Martha “Marty”) Crawford of Knoxville, Tennessee, David L. (Brenda) Crawford of Brownsburg, and Shawn C. (Teresa) Crawford of Forest, Virginia; thirteen grandchildren; twenty-two great grandchildren; two sisters-in-law, Marjorie Crawford of Winter Haven, Florida, and Barbara Crawford of Indianapolis; and several nieces and nephews. In addition to his parents and his wife, Jack was preceded in death by his three brothers, Robert Crawford, Jerry Crawford, and Norman Crawford; one sister-in-law, Phyllis Crawford. A funeral service will be held at 11:00 a.m. on Wednesday, March 23, 2022, at Myers Mortuary in Lebanon, Indiana, no visitation prior to services. Jack will be laid to rest following services at Oak Hill Cemetery in Kirklin, Indiana. Memorials may be directed in his memory to Eagle Creek Grace Bible Church, 7001 West 46th Street, Indianapolis, Indiana 46254. Online condolences: www.myersmortuary.com

The family of Jack Dean Crawford created this Life Tributes page to make it easy to share your memories.

Send flowers to the Crawford family.