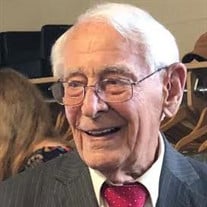 James F. “Jim” McVey, 102, passed away on Saturday morning, July 10, 2021, at Homewood Health Campus in Lebanon, Indiana. Jim was born on a farm in Clinton County near Kirklin, Indiana on August 5, 1918, the youngest of three children of the late Franklin John and Helen Melba (Kimble) McVey. With the exception of four years when he worked out-of-state, Jim lived from age 5 until his death in Boone County, growing up on his family’s farm and later living with his wife and children in Lebanon. Jim was a 1937 graduate of Lebanon High School. On August 24, 1940, he and Helen L. (Burgess) McVey were married in the old Methodist Church in Lebanon; 72 years later on February 5, 2013 she preceded him in death. From 1943 to 1946 Jim served his country in the U.S. Navy as an Aviation Flight Engineer aboard seaplanes on submarine duty and ship convoy escort in the Atlantic. Before and after the war, he served in the Indiana National Guard. Using the opportunity provided by the G.I. Bill, Jim graduated from Purdue University with a degree in Electrical Engineering in 1950. Following graduation from Purdue, Jim worked from 1950 to 1954 for Westinghouse Electric Company, which took the family out of state. Jim and his family returned to Lebanon when he gained employment with Allison Division of General Motors in Indianapolis, from which he retired on July 1, 1985. Jim served on the Planning Commission and subsequently the Zoning Board of Appeals in Lebanon for a combined 55 years, retiring in 2011 at age 93. Seven different mayors appointed and reappointed him to the positions. Jim was a dedicated member of Centenary United Methodist Church in Lebanon and a former member of the Masonic Lodge. He lived life to the fullest and loved riding his motorcycle, reading, playing cards, especially Bridge, camping, and traveling in all 50 states and other countries around the world. At age 96, he took an Honor Flight with other veterans to Washington, DC, and he celebrated his 101st birthday at the Air Force Museum in Dayton, Ohio. Jim loved his family and friends and will be deeply missed by all who knew him. Survivors include his children: James William “Bill” (Leoni) McVey of Chicago, Illinois, Richard Allen “Rick” (Janice) McVey of Woodland Park, Colorado, Jean Ellen (Daniel) Daly of Green Mountain Falls, Colorado; grandchildren, Jennifer (Susan), Melanie, Mark (Elizabeth), Alana (Sean); and one great grandson, Andrew. In addition to his parents and his wife, Jim was preceded in death by siblings, Vern McVey and Clara Frye. Visitation is planned from 4:00 p.m. to 7:00 p.m. (ET) on Friday, July 16, 2021, at Myers Mortuary, 1502 North Lebanon Street, Lebanon, Indiana 46052. Funeral Services will be held at 2:00 p.m. (ET) on Saturday, July 17 at Centenary United Methodist Church, 910 Fordice Road, Lebanon, Indiana 46052. Streaming of Jim's service can be viewed on the Myers Mortuary Facebook page at the time of service on Saturday. On your electronic device, go to: Myers Mortuary Facebook. Interment with Military Rites will follow services at Oak Hill Cemetery in Lebanon. In lieu of flowers, memorials may be made in Jim’s honor to Centenary United Methodist Church, 910 Fordice Road, Lebanon, IN 46052, or the Lebanon Public Library, 104 East Washington Street, Lebanon, IN 46052.

The family of James F. McVey created this Life Tributes page to make it easy to share your memories.

Send flowers to the McVey family.