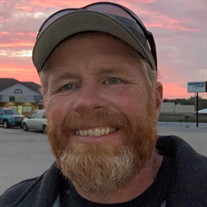 Jason Barrett Smith, 46, passed away Friday, October 15, 2021. He was born April 23, 1975, in Danville, Indiana, a son of Sherry Elaine (Jordan) Doolin and the late Daniel Thomas “Danny” Smith. On February 14, 1998, he was united in marriage to Starr Lynn (Bailey) Smith; she along with their two children Cory (son) and Alyssa (daughter) survive. Jason graduated from Lebanon High School in 1993 and during high school he worked for Bret Lee Farms as a farm hand for several years, as well as the Blue & White Truck Stop for a short time as a cook. Following school, he enlisted in the United States Air Force. After his honorable discharge, he graduated from ITT Tech in Indianapolis with an HVAC certificate. Jason was a member of Local Union #1393. For 15+ years, he worked as a pipe-fitter for CenterPoint Energy, formerly known as Vectren Energy. Jason loved the outdoors and everything that went along with being outdoors. He loved to go fishing, hiking, long walks, bike rides, canoeing, camping, campfires, boating, and hunting. He loved to spend time doing all of these things and more with his wife and kids as they were his world. It meant so much to him to get to be there alongside them, teaching them all of his knowledge! He was so knowledgeable about anything you could think of, and he loved to share it and experience it with them. He loved demolition derbies, NASCAR races, and dirt track truck racing was one of his favorites. He is known to most of his friends as “REDDOG”. He was the best daddy in the world, and he made sure to never miss any events his kids were in. He was always involved lending a hand in everything they were a part of. He coached t-ball, baseball, softball, and helped with the Harney Elementary PTO. He was very involved with Boy Scouts, he helped with girl scouts selling cookies, he volunteered with the United Way, Habitat for Humanity, volunteered with LHS marching Band and Tigerettes, and made sure to proudly take Alyssa to every daddy daughter dance. He loved going on date night and random date days with his wife, the love of his life, Miss Starr, or Princess Starr Monkey as he would call her. He loved doing crafts, games, and playing cards with her, doing Bible studies with her, and loved visiting different wineries and breweries. Jason was very ornery and loved to pull pranks, tell jokes, and loved to give nicknames to his kids and their friends. He loved going on vacation with his family, one of the favorites being Gulf Shores, Alabama. Although, he did not like to stay outside on "Ginger" beach as he would call it for too long because he would burn so easy. Jason loved his union brothers, enjoyed being a union steward, and just being there for all of his brothers. Jason was always there for anyone and would drop everything to help. He would give the shirt off his back to help his friends and family as well as anyone in need. He was an all-around great man who touched the lives of so many people. Jason will be missed so much by his family and by everyone who knew him. He was a donor & he will continue to live on & touch lives. Survivors include his wife, Starr L. Smith; two children, Cory Austin Smith and fiancée, Carley Morgan and Alyssa Rachelle Smith and boyfriend, Casey Posey; mother, Sherry E. Doolin; sister, Jennifer (Scott) Howard; brother, Daniel Paul Smith; stepbrother, Sonny Ourai; father-in-law, David Bailey Sr. (wife Denise Bailey); mother-in-law, Patty Bailey (Ol’Patty, or Ol’ Mable as he called her); brother-in-law, David Bailey Jr. (Alyssa Martin) (Super Dave as he called him); nieces and nephews, Emma and Ella Bailey, Tiffany and Daniel Howard; fur babies, his grand dogs, Buddy, Winnie, Georgia, Casper, and Gus and the grand cats, Jill and Sissy. Aunts, Uncles & Cousins: Gladys & Richard Edwards of Lebanon & kids (Melody & Jim Brown (Isaac & Lauren) (Rick Edwards & family), Gloria & John Knox of Lebanon & kids (Denny Joe & Sam (Keeley & Trey) & (Wayde Knox & family); the late Wilma MClaine (Mel Mc Claine) of Lebanon & kids ( Vicki & David Miller (Cole Miller, Veronica & Eric Taylor (Knox & Brooks) & Harlow), Paula Moore & kids (Kashia & Dan Cutler, Klayton Moore), Wanda & Steve Dickerson of Lebanon & kids (Angie & Larry Serrano & kids (Destiney, Destiney, Faith, Austin, Jeffery) & (Steve's kids & families) & the late uncles Denis Smith, Mike Jordan, Bobby Jordan A Celebration of Life for Jason was held on Saturday October 30th, 2021 at The Hot Water Pond in Lebanon Indiana. Myers Mortuary and Boone County Crematory have been entrusted with his arrangements. In lieu of flowers for Jason’s memory please donate to Boone County Sylvia’s Child Advocacy Center, 218 East Washington Street, Lebanon, IN 46052. Online condolences: myersmortuary.com

The family of Jason B. Smith created this Life Tributes page to make it easy to share your memories.

Send flowers to the Smith family.